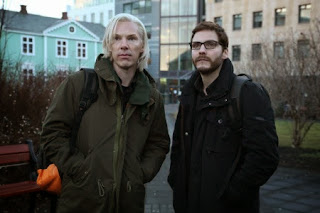 “The Fifth Estate” is getting a pretty good pummeling by film critics, which can only mean veteran direct Bill Condon (“Dreamgirls,” “The Twilight Saga”) is on to something genuine.

Hopefully there is some investigative film critic somewhere who is digging to uncover which censor insured this cinema tribute to the greatest whistle-blower of all time would not be offensive to any government department or official.

Maybe we wouldn’t expect the American feds to lionize Julian Assange or Pvt. Bradley Manning, but certainly all United States citizens do need to know the U.S. federal government is suspicious of all its own citizens.

Sure, we sort of knew that. But now we really know it.

“Fifth Estate” begins with the mercurial personality of blond-haired Assange, an Australian visionary who believed the anonymity of the internet would make it a modern day trumpet of the people – a weapon for justice powerful enough to bring down the most arrogant corporation…or government.

That’s when the consequences with content begin. Assange is portrayed giving in to his dark side, being more selfish and less idealistic. Domscheit-Berg begins to see Assange’s feet of clay and distances himself from the new schemes of Assange to publish online that massive trove of classified U.S. government documents.

We all know the story. It was in all the newspapers.

What we don’t get is anything new. All the cinema action comes from dramatizing the race to prevent the release of this information before Assange decides when and how to release it.

“Fifth Estate” doesn’t take us too far down the rabbit hole. Laura Linney and Stanley Tucci play a couple of extremely upset mid-level officials in the State Department, wailing about treasonous acts. Army Private Bradley Manning is nowhere to be seen, except for a photo of Manning in a screen tableau of the mainstream media coverage.

So…what are we left with? A very sanitized version of the affair, based on Domscheit-Berg’s own book “Inside WikiLeaks: My Time with Julian Assange at the World's Most Dangerous Website."

Whether or not “Fifth Estate” is a good movie isn’t the point. Everyone should see this film just to be reminded that powerful and omnipotent (and often hidden) government forces are at work right now in our native land.

Posted by TucsonStage.com at 5:58 AM