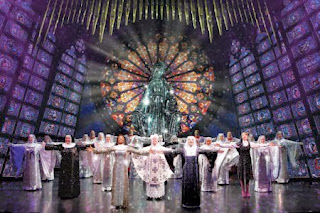 These nuns get the church rockin' to the Seventies in "Sister Act."

If you loved the movie starring Whoopi Goldberg, or just love the idea of poking some gentle fun at Catholic nuns who still haunt your memory, you will love the “Sister Act” production Broadway in Tucson has brought to Centennial Hall at the University of Arizona.

Full of energetic performers and vibrant stage sets, this show has the feel of a genuine New York production. The church where much of the second act action takes place wins kudos for its towering Madonna figure and faux stained glass window treatments.

All the original songs have echoes of the “Philadelphia Freedom” era, with pumped up disco, jumpsuits and bell bottoms…and a mirror ball, for those who remember the Seventies. My personal favorite touch was Monsignor O’Hara (Richard Pruitt) speaking from the pulpit with a sexy Barry White voice.

Ta’Rea Campbell has the Goldberg role of Deloris, singing in a Supremes-type trio on Christmas Eve in Philadelphia, with her show business career as big a dream as getting a nice gift from Santa Claus.

Campbell has a strong voice and packs a lot spunky sass into her role. She isn’t a comic performer so much as she is an enthusiastic one, which is plenty good enough.

At times she is nearly upstaged by Hollis Resnik as the staunchly conservative Mother Superior. Resnik with her older, more mature presence gives her musical moments a more resonant touch that just feels deeper than the others.

The story, of course, sets up Delores as a gangster’s moll who accidentally witnesses a murder. For her own protection, Delores is sent by police to hide in local convent.

The reserved personalities of all the sisters in their drab black robes get a good shaking up when Delores starts to roll. As she turns the staid chorus into a joyful celebration of life, everybody feels lots better.

All the secondary cast members pitch in on their numbers to keep the energy building. A trio of gangsters sings like the Bee Gees, several of the nuns have engaging turns as they come to life under Delores’ influence.

“Sister Act” is a feel-good musical for all the family, flaunting its innocence about life and making you love it. Performances continue evenings at 7:30 p.m. Wednesday and Thursday, 8 p.m. Friday and Saturday, 6:30 p.m. Sunday, matinees are 2 p.m. Saturday and 1 p.m. Sunday, at Centennial Hall, 1020 E. University Blvd., on the University of Arizona campus.

Tickets are $29-$75 through Broadway in Tucson. Details and reservations, broadwayintucson.com, or in person at the Centennial Hall box office.

Posted by TucsonStage.com at 2:32 PM