SATIRICAL SOAP OPERA:"WHAT IS THE CAUSE OF THUNDER?" 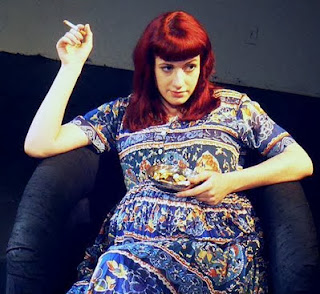 There is genuine talent onstage at Beowulf Alley Theatre. The satirical comedy, “What Is the Cause of Thunder?” by Noah Haidle, has had successful productions in other cities.

But this particular Tucson production doesn’t quite make it. There are some extenuating circumstances involved, to be sure.

Hearing the actors is often a problem at Beowulf Alley because the theater itself contains a lot of echo. Big voices work much better here than normal conversational voices. 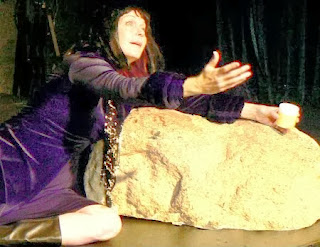 But speaking in a loud voice which sounds natural and effortless isn’t easy. More rehearsal time would have helped, too.

At last night’s opening performance, the many roles played by Lucille Petty -- and the inability of Susan Arnold’s character to tell the difference between real life and her fantasy life -- often made all the characters feel blurred.

There are no other actors in the cast. Leslie Miller is directing.

At times it was difficult to keep track of all the twists and turns Haidle has written into his story of Ada’s (Arnold) battle with mental illness. Or maybe it isn’t mental illness. Maybe it is a projection of dreams continually frustrated by reality.

Petty plays Ophelia, the daughter of Ada, and several other women who have an impact on Ada’s unsatisfied life. As well as those on the TV stage set who complicate Ada’s make-believe life.

Ada is the perennial soap opera actor who can never get into “real” acting. After 27 years in the daytime version of show business, her career stalled out quite some time ago.

Ophelia wants to be supportive, but she has plenty problems of her own – including a twin sister trapped in an off-again, on-again coma for six years. But that may be two of the characters she plays on the soap opera…I think.

That title comes from a line in “King Lear,” and is also the name of the soap opera on which Ada has toiled so loyally for so long.

Posted by TucsonStage.com at 5:32 PM