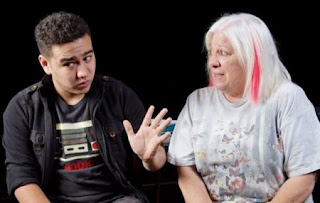 Leslie J. Miller as director of “Kimberly Akimbo” has given the quirky play a more serious intent in Winding Road Theatre Ensemble's production at Zuzi Theatre, 738 N. Fifth Ave. Miller directed the play five years ago with much the same cast in a late night production at Live Theatre Workshop.

That time around the show had a more edgy interpretation, in keeping with the extreme sensibilities of David Lindsay-Abaire's script filled with startlingly coarse language.

Hapless Kimberly caught in the middle has her own problems. She is afflicted with a disease of rapid aging. Though she is only 16, her body looks to be 65. Medical books say those afflicted rarely live past the age of 16.

So is Kimberly in her last year of life? She doesn't know, and it isn't like her self-obsessed mom even cares. But Kimberly's mental age is still 16, with all the bottled up angst of a teen, but also all that wonderful eagerness for life.

She even has a boyfriend in her high school class, the clearly nerdy Jeff (Evander A. Gaines). It is easy enough to imagine Jeff doesn't have any friends, either, but sees in Kimberly a fellow traveler on the lonely road of adolescence.

Completing the cast is Kimberly's dad Buddy (Richard Gremel), beaten down and driven to drink. He'd like to be a better father, but doesn't quite know how. Fumbling through each day is the best he can manage.

There are several subplots running through the conflicted lives of this dysfunctional family, so pay closer attention and choose your favorite.

Another difference from the earlier production – which included Peterson, Gremel and Preston, with Miller directing – is that this time Peterson, one of the city's finest character actors, dresses more “normally.” She doesn't look like a defiant teen from an earlier decade, in Doc Martin shoes, goofy t-shirts and a ball cap.

So at times it isn't immediately obvious to the audience that Kimberly is 16, literally a girl in a woman's body, thinking like a 16-year-old.

There is heartbreak aplenty in seeing how neglectfully Kimberly is treated by everyone but her school chum Jeff. It is the crazed-with-frustration Deborah who befriends Kimberly, for selfish reasons.

Deborah sees a unique opportunity in this kid who looks like an older woman. Deborah dreams up a bank fraud scheme in which Kimberly can easily pose as a daffy senior citizen going up to the bank teller with some bogus checks.

Kimberly would rather not do this, but loves the feeling of finally being needed by someone. Do resist your temptation to run up on stage to stop her.

Posted by TucsonStage.com at 6:07 AM