"ANNA IN THE TOPICS" HAS THE LATITUDE AND ATTITUDE 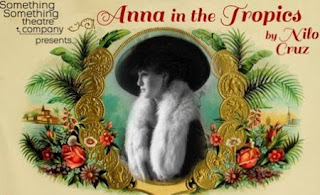 Ever since I saw the steamy and heartwarming “Anna in the Tropics” by Nilo Cruz, produced by Arizona Theatre Company in 2004, I have loved this play. It contains so many of my favorite topics.

The importance of quality, the temptation of compromise, the nature of true love, the nourishment of family – it's all there in this Pulitzer Prize winner which Something Something Theatre Company opened recently.

Esther Almazan as director finds the magic in every key scene, stirring up all the flavorful emotions of a traditional Cuban family determined to keep its traditional cigar making “factory” alive on the Florida gulf coast.

They call it a factory but really it is just a handful of relatives sitting around wooden tables in the early 1900s, patiently and lovingly rolling up just the right blend of carefully chosen tobacco leaves – not too loose, not to tight – to create heavenly cigars.

Early on we are reminded just how much of a period piece this is, when one of the characters proclaims that every man has two loves in life, his wife and his cigar.

Former smokers should be warned that this rich dialogue contains many wonderful references to the joys of smoking. These are characters who do, indeed, appreciate all the pleasure their lives have to offer. Spend much time in their company and lighting up even a cigarette starts to seem well worth the risk.

Cigarettes, though, are just for those modern types working so hard to make piles of money that they don't have time to stop long enough to properly appreciate the full draw of a fine cigar rolled by hand with great affection.

That's the type of cigar this family creates through the long, hot days before air conditioning was invented. To help the time pass more pleasantly, it became the tradition in Cuba for cigar factories to hire a reader, someone who sat in a chair opposite the workers to expressively read them world class literature.

These readers were as theatrical as they were educated, knowing all the greatest published books. To the largely uneducated cigar rollers, mostly women, the readers were like rock stars.

In the Something Something cast, Eddie Diaz as Cheche is the spark plug of confrontation, insisting this family is terminally stuck in the past. They need to act like Americans, buy modern cigar-making machines that cheaply produce hundreds more cigars. Yes, they are inferior smokes...but so what?

CiCi Salcido holds center stage as Ofelia, the matriarch who keeps everything together, insisting their family is known for making the best cigars and always will be. Stepping into this tinder box of combustible passion is the factory's new reader arriving from Havanna, Juan Julian (newcomer Thomas Tucker).

Ever gracious and refusing to take sides, Juan becomes romantically involved with Conchita (a convincing Whitney Morton Woodcock). Unfortunately, Conchita is already married to Palomo (Tiernan Erickson). You can see where this is going.

Strong in smaller roles are Paul Hammack playing Santiago, the harried husband of Ofelia. He always means well, and feels so sorry about drinking too much. Robin Carson brings spunky energy as the young and idealistic Marela.

This is the debut season of Something Something Theatre, starting out the Tucson way with very little in resources but moving van loads of courage and enthusiasm. Their investment is paying off.

Tickets are $22 general admission, $18 students, seniors, military. For details and reservations, 520.468.6111, or visitsomethingsomethingtheatre.com

Posted by TucsonStage.com at 10:04 AM