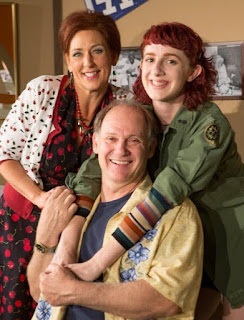 Top of the cream actors (from L) Susan Kovitz, David Alexander Johnston and Lucille Petty stir up Invisible Theatre's "I Ought To Be in Pictures."

There was life before cell phones and laptops. We know this because Invisible Theater is playing Neil Simon's “I Ought To Be in Pictures,” with actors using an actual typewriter and a telephone.

Kind of a shock to see, especially that typewriter. So noisy. How can a writer think with all that clatter going on?

No matter. From out of all this low tech chaos, director Susan Claassen and associate director Fred Rodriguez have created a lighter-than-air comedy laced with loving sentiment in a top cream cast of Lucille Petty, David Alexander Johnston and Susan Kovitz.

Simon's play debuted in 1980, telling the story of Herb (Alexander) who ran away from his New York wife and family in the early Sixties, beating the hippies to California and starting his arty life in Los Angeles as a writer for TV and the movies.

The play opens with the arrival at Herb's cluttered West Hollywood bungalow of his feisty 19-year-old daughter Libby (Petty).

This is a huge break-out performance for Petty. The role calls for her to enter as a petulant teen angry at this father who abandoned her without a second thought and never made any attempt to stay in touch.

Working her way through fifty shades of outward revenge and hidden remorse, Petty is always completely believable. She does this with a genuine inner energy, the soulful kind, not just a lot of jittery surface body language.

Johnston, for his part, matches her scene for scene as the man who has been her reluctant father for 16 years, feeling guilty but not guilty enough to make amends.

Once the belligerent daughter and this blustering defensive father see each other face to face, you can feel them both begin to change. It isn't something you see, but something you feel out in the audience.

Providing the balance in this ensemble trio is Kovitz as Steffy, the free-love girlfriend of Herb, willing to bide her time without any strings attached. Within the play's plot machinations, she becomes the straight-person for both Libby and Herb.

This is Neil Simon, after all. Jokes are the rye bread and sauerkraut that holds everything together. The lack of a decent delicatessen in Los Angeles becomes a running joke for Herb, ever a New Yorker at heart.

What we get is an evening of excellent theater with lots of bubbly fizz but, down under the ice cubes, a touching insistence on the importance of family.

“I Ought To Be in Pictures” continues through May 1 with performances at 7:30 p.m. Wednesdays through Saturdays, 3 p.m. Sundays, at Invisible Theatre, 1400 N. First Ave. An additional 3 p.m. matinee is April 30. All tickets are $30. For details and reservations, 882-9721, or visit invisibletheatre.com

Posted by TucsonStage.com at 4:43 PM