THIS "GOSPEL" IS A MIND-STRETCHER 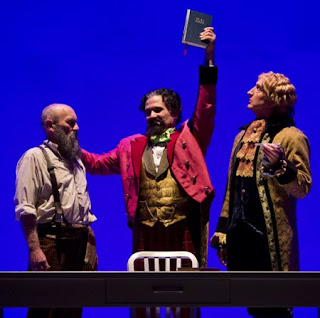 Favorable reviews are filling the internet, praising former Tucsonan Scott Carter's “The Gospel According to Thomas Jefferson, Charles Dickens and Count Leo Tolstoy: Discord.” Arizona Theatre Company just opened a production both dazzling and energetic, but personally – I don't get it.

Carter's day job is being the executive producer of HBO's “Real Time with Bill Maher.” Carter has a way with comedy, to be sure. But the structure for this “Gospel” is several levels above anything you will ever see on TV.

The setup begins with a set design by Takeshi Kata that uses extremely bright light to create a sterile kind of white-walled laboratory atmosphere (probably located not too far from the unseen Heaven's own Pearly Gates) where Jefferson (Larry Cedar), Dickens (Mark Gagliardi) and Tolstoy (Armin Shimerman), wearing clothing similar to what they wore on Earth, pop into the room and can't get out.

The room is bare, except for a hard-edged table and three straight-backed chairs. As these egotistical giants realize they are locked in these minimalist confines, they begin sputtering conversations to mark their own philosophical territory lest they be forced to defend it against an intellect equal to their own.

Cedar's light southern accent comes and goes as he creates a Jefferson of some elegance, still enamored of the British culture enough to embrace an appreciation for complete servitude.

Gagliardi sees Dickens as something of a dandy, dedicated to the family idea that father knows best...and has the domestic weapons to remove any doubt.

Shimerman makes the strongest impression as Count Tolstoy, probably because we know the least about this scrunched-up man born with a silver spoon in his mouth and still angry about it. When his Tolstoy storms and rages around the stage, shouting about the inequalities heaped upon the ordinary man, who can resist nodding in agreement.

History assures us that all three men really did create their own versions of the New Testament to emphasize what each thought was the most important part. Jefferson took out everything but the actual writing of Jesus. Dickens had no patience with the Scripture’s childlike stories. Tolstoy didn't believe in the Bible's miracles.

Much of the play's humor comes from its skepticism, and the critical comments of these rigid characters making fun of whatever parts of the New Testament gospel they don't like. Other outrageous remarks are funny because they clash so harshly with our present politically correct version of the Truth as we want it to be.

Not to overgeneralize or simplify the situation, but “Gospel” will be best appreciated by those who think it would be completely appropriate to binge-watch an evening of public television while eating a quart of peach ice cream.

So, is this play for you? If you want to give the impression you enjoy brainy humor, buy a ticket. If in your heart you are more of a Neil Simon kind of person, save your money.

The dialogue will stir some reflection, no doubt. The performances shaped by director Matt August are excellent, as are all the production qualities.

We do applaud Artistic Director David Ira Goldstein and Arizona Theatre Company for putting all their positive energy into a demanding play that asks so much from its audience.

“Gospel” caps a marvelous season for the state's own theater. All the shows have been either good or great. This one is the mind-stretcher.

“The Gospel According to Thomas Jefferson, Charles Dickens and Count Leo Tolstoy: Discord” runs through April 30 with performances at various times Tuesdays through Sundays in the Temple of Music and Art, 330 S. Scott Ave. Tickets are $28-$68.

For details and reservations, 622-2823, or visit arizonatheatre.org

Posted by TucsonStage.com at 6:38 AM