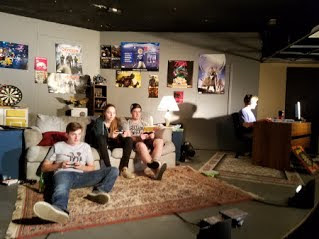 Is this the video game room...or the war room?

When the technology of electricity developed industrial and residential applications in the 19thcentury, it changed the world forever. Back in those early days, virtually anything seemed possible through electricity.

Mary Shelley's “Frankenstein” is still the iconic metaphor defining the fear of taking electricity too far.

Now our own early years of digital technology are having the same impact on the 21stcentury, twisting it into possibilities unimagined until now.

Which makes the hypnotic seduction of rapidly evolving video games with their super-real visual effects the perfect subject for the precocious members of Acting Innocent theater company in their production of “Leveling Up' by Deborah Zoe Laufer.

The subject isn't video games, but the nature of reality. Somehow, watching these high school kids lose themselves in their neon-bright screen worlds where killing people is a way to keep score has a power you just don't get from reading the books of learned philosophers.

Even more poignant is the experience of dedicated gamer Ian (Vaughn Sherman), tapped by the National Security Agency to fly drones for the American military, when he realizes the little figures on his screen are real people. It feels like he is playing a video game, but he is in fact killing somebody's fathers and sons.

This is the heart of “Leveling Up,” a gamer term that means taking your game to the next level. On stage in an unkempt apartment cluttered with empty beverage containers, old pizza boxes and similar fast food detritus is a tattered couch, a well-worn chair, a table with a laptop and some other stuff.

The gamers are the intensely serious Ian, whose video skills get him hired by the National Security Agency, Chuck (Guy Norris) who is also interested in Jeannie (Stefanie Tedards) and Zander (Griffin Johnston) strung out between the reality he wants and the reality he gets. Johnston is also the director, getting natural performances from his cast.

What would be the adult version of a tweener? People who are not yet adults, but have put adolescence behind them some time ago.

They have grown up meeting online, shopping online, visiting every possible corner of the globe, mountaintop and sea online. And of course, waging battle and finding love among the many alien worlds in outer space.

They love the immediacy of their virtual world and their virtual friends, but worry right here in their parents' house because they also know virtual reality isn't real. It's just virtual.

But maybe it's a different kind of real. Or maybe it is just a digital promise of something that can never be fulfilled.

Ever up for a real world challenge, all the cast members stay onstage after each performance to discuss the issues the play brings up. The evening I attended, the performance and the discussion afterward were equally engaging.

Get all the details at:

Posted by TucsonStage.com at 6:00 AM