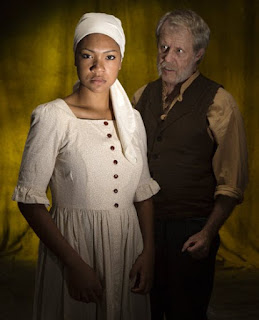 Vaune Suitt as Celia and Joseph McGrath as William Powell  are confronted by history at the Rogue Theatre.

Nobody likes to think about the bad things from their past, yet we also know it is important to learn from our mistakes.

These are the horns on which the Rogue Theatre has stretched its production of “Celia, A Slave” by Tucson freelance writer and academic Barbara Seyda.

The play is structured as a series of 22 monologues presented as eye-witness trial accounts by 14 actors, directed by Cynthia Meier: a mosaic of black and white faces representing the slaves and white people of small town Missouri in 1855 – just six years before the first shots were fired in the War Between the States – at the trial of 19-year-old Celia who murdered her white owner David Newsom after being raped multiple times since she was 14.

The heartbreaking story of Celia is a notoriously well known page from our antebellum past, which Seyda researched in detail. Not only the details of the trial itself, but of the culture of the time, the hardships of rural life, the social pressures that were equally difficult on rich and poor alike.

Seyda's writing draws up such powerful emotions from this testimony, "Ceylia, A Slave" won the prestigious Yale Drama Series Award in 2015.

With an ear for regional speech and the rhythms of clever country people who didn't let their lack of formal education limit their understanding of human nature, Seyda creates right before our eyes the very smells and substance of that time.

“Celia” was not written as an opportunity for today's white people to find redemption by wallowing in their own guilt over cruelties committed 160 years old, though there is plenty of that available.

Seyda, who is white, seeks a loftier level of resolution. She wants to open windows of understanding between the races, to appreciate the need in 1855 for twisted logic that would justify an economy built on slavery – but also to create a kind of hallowed place between the white people who didn't own slaves and the black people who had much to offer society if they were just given a chance.

The very hallowed place that would become so important to finding a meaningful peace among all people once the Civil War was over. Our national tragedy is that this hallowed place of hope for meaningful forgiveness was not respected after the war, but was trammeled into blood-soaked tatters of revenge and vituperation that continue to this day.

All of these thoughts and more are waiting in the Rogue Theatre's beckoning performances. Plan on feeling uplifted as you leave the theater, there will be myriad reasons to do so.

There are no leading roles but an ensemble collection of both magnetic and unremarkable townspeople. Some feel disarmingly casual about the guilty girl's plight, others are so arrogant you want to leap onstage and slap them silly.

Here in 1855 America, the proud land of democracy for all, Celia was given a proper public trial. And everybody knew she would be quickly convicted by a jury of 12 white men, some of them slave owners.

The most powerful speech is given by sad-eyed David Greenwood as John Jameson, who is Celia's defense attorney. Keenly away of the national opposition building against slavery, Jameson is tortured by the pain that Celia maywell be one of the last African Americans to die as a slave. After he speaks, the audience silence is deafening.

"Celia, A Slave" continues through Sept. 24, with shows Thursdays through Saturdays at 7:30 p.m.. matinees Saturdays and Sundays at 2 p.m. at the Rogue Theatre, 300 E. University Blvd. Tickets are $38; student rush tickets, $15, when available 15 minutes before each performance.

For details, reservations and online ticket purchases, 520-551-2053 or theroguetheatre.org

Posted by TucsonStage.com at 2:57 PM