"SEMINAR" A BRILLIANT COMEDY ABOUT WRITING 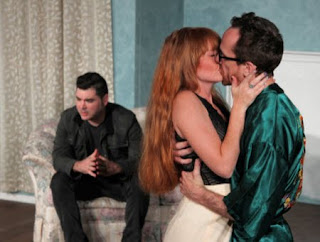 Live Theatre Workshop has upped its game with a zippy production of Theresa Rebeck's brainy comedy “Seminar,” performed by a precisely balanced quintet of actors directed by the crisply focused Eva Tessler.

The complex dialogue is filled with fanciful imagery about the foibles of fiction writing and the many ways an eager writer's heart can be sliced and diced by a cynical editor waging his own ego wars on the battlefield's of his students' copy, all under the guise of teaching them something.

Yet, Tessler is so good at maintaining the intensity in scenes of power plays and revenge that never stop ping-ponging back and forth with brilliant backhand strokes and forehand smashes, little pockets of spontaneous laughter keep flaring up in the audience – no doubt from people who recognize their own life experiences with teachers and pupils.

“Seminar” played nearly six months on Broadway, closing May 6, 2012. For most of that run Alan Rickman played the bitter writing coach Leonard. Cast in the role for LTW is Jonathan Northover.

Of all five cast members, Northover's Leonard has the least amount of time on stage yet must make the strongest impression. The personalities of the other four, all students in his informal seminar held at one of the students' rent controlled mansions on Manhattan's upper east side, are based on their reactions to the vitriolic instructor.

These four turn in performances steeped in nervous ticks and mannerisms that fill out their characters. Not only does this attention to detail add to the clarity of their differences, it also makes them feel more familiar to us – and we feel their pain. Your own personality will decide whose pain you feel the most.

Samantha Cormier plays the wealthy and pampered Kate, feeling insecure and more than a little bit guilty about having such a privileged life. She loves thinking about all the subtle nuances of literature but isn't sure any of that appreciation finds its way into her own writing.

Josh Parra handles the difficult role of Douglas,who is maybe not as rich but definitely more connected to the publishing world than Kate. Douglas knows he's good, but is he that good? Or does his father just know a few people?

Brie Zepeda has some brilliant moments as the power-playing Izzy, who doesn't care if anyone thinks she has talent or not. She is just determined to win. Whether it is being a strident feminist or a warm and cuddly sexpot, Izzy will do whatever it takes to get noticed, get published, whatever.

Steve Wood has the scrappy role of Martin, a perpetual student with no resources but a dedication to the enduring value of great writing. So what is it that makes one writer's fiction greater than all the others? Martin can't say for sure, but is totally convinced he hasn't seen it yet. Certainly not from Leonard.

“Seminar” runs through Sept. 23, with performances at 7:30 p.m Thursdays through Saturdays, 3 p.m. Sundays, at Live Theatre Workshop, 5317 E. Speedway Blvd. Tickets are $20, with discounts available. Thursday tickets are $15. For details and reservations, 327-4242, or livetheatreworkshop.org

Posted by TucsonStage.com at 5:03 PM