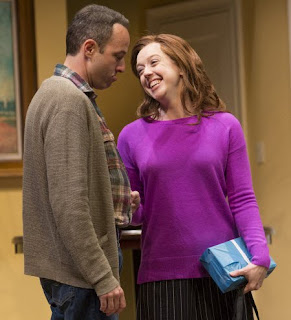 George (Dave Mason) and Jennie (Blair Baker) feel the magic as soon as they meet.

Thanks to easy divorces and several decades of cultural tumult, today there are lots more people finding themselves living alone in middle age – and later. More people are also living longer than they used to, and a lot of that “extra time” is being spent alone. Not a laughing matter.

Enter Neil Simon's “Chapter Two,” an audience favorite since it opened on Broadway in late 1977, filled with intelligent jokes bandied about like glistening weapons of self-defense, or flaming torches to light those desperate nights. Whichever metaphor you choose, Arizona Theatre Company provides the atmosphere in its casually dressed but appealing production directed by Marsha Mason.

In real life, Mason was the woman who fell in love with Simon after his first wife died of cancer. Simon was still grieving when he met Mason in 1973 while the two were working on Simon's play, “The Good Doctor.” The instant chemistry they felt for each became the heart of this semi-autobiographical story.

Irony strikes again in ATC's production, with Mason as the director of her own love story. Jennie Malone (Blair Baker) is the witty, divorced woman representing Mason, and widowed George (David Mason) is the successful writer who would have been Simon.

“Chapter Two” is famously set up with two New York apartments sharing the same stage, those of Jennie and George. The scenic design by Lauren Helpern is 1970s modern and absolutely gorgeous, implying both Jennie and George have tons of money.

Well, every Neil Simon comedy is a fairy tale of sorts. This one is considered the playwright's early foray into more serious matters of genuine heartbreak.

It is tempting to believe Mason finds lots of depth in this script somewhat based on her own life and, consequently, has her actors keep their emotions understated and their tone civilized to emphasize that seriousness.

Of course there is Simon's continuously bouncy banter, but the humor here feels more like a life jacket to get George and Jennie through their storms of the heart.

Remember ATC's high-toned apartment confrontation “God of Carnage” in 2011? The energy level of “Chapter Two” is just the opposite. Always civilized and subdued.

The other two cast members are Leo (Ben Huber), younger brother of George, and Faye (Diana Pappas), chipper best friend of Jennie. All four actors and their characters have a polished urbanity that says “Here is a special night of theater, the perfect date for those starting the second act of their own lives.”

On stage it takes a little while for George and Jennie to meet. Leo keeps encouraging George to get back into the dating game. George can't help feeling he would be unfaithful to his late wife.

Jennie, because she was divorced, is in no hurry to set that hamster cage in motion again, either. All four people seem to be in their 40s, with plenty of references to the time period. Raised before the sexual revolution began, they aren't exactly sure how far is too far.

So we watch them all dither and dart about, wanting to and not wanting to, with one foot in and one foot out...their indecision feeling so timelessly right here in 2017.

This well-matched cast makes the production a truly fine ensemble effort with love theme and variations worthy of being subtitled “Quartet in the Key of Life.”

“Chapter Two” continues through Sept. 30 with performances at various times Tuesdays through Sundays at the downtown Temple of Music and Art, 330 S. Scott Ave. Tickets are $25-$63 with discounts available. For details and reservations, 622-2823, or visit arizonatheatre.org

Posted by TucsonStage.com at 3:44 PM