"A HIJACKING" PUTS YOU IN THE MIDDLE 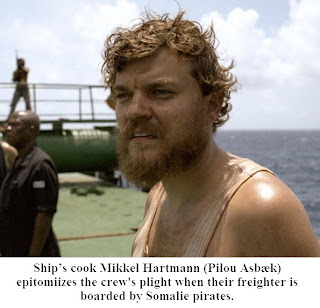 You think the negotiations are tough to buy a new car? Try negotiating with Somali pirates in the Indian Ocean who have seized your ship and crew for $15 million ransom.

That’s the setup in this genuinely engaging psychological drama confronting a Danish shipping executive who feels personally responsible for bringing the ship’s seven-man crew back to Denmark. His idealism will also make you homesick for those more wholesome times we used to have in the United States.

As written and directed by Tobias Lindholm, a promising member of the new generation of Danish filmmakers, “A Hijacking” now playing at the Loft Cinema, 3233 E. Speedway Blvd., is as lean and direct as any film aficionado could want.

Søren Malling is completely believable as Peter Ludvigsen the manicured shipping executive adept at playing the mind games of European board room powerbrokers.

But when it comes to matching wits with a Somali gambler who makes it clear he is not some provincial outlaw sailor, Ludvigsen discovers all the rules of this game are completely different.

More brutal, more ruthless, with no gentlemanly set of honorable standards to maintain, Ludvigsen is thrown back to relying on his own animal cunning.

Can this negotiator for the pirates, simply called Omar (Abdihakin Asgar), be trusted at all?

Humanizing the situation to build up the tension is the amiable ship’s cook Mikkel Hartmann (Pilou Asbæk). He’s not motivated by bravado but by love for his family. As negotiations drag on for many weeks, Mikkel begins to wonder if the lives of this crew are also negotiable for Ludvigsen, who could be feeling more pressure from his board of directors in Copenhagen.

Once again, trust becomes the major emotion, for without trust there can be no deal. For the audience, be reassured this is not an American movie that will be resolved by some giant explosions and a violent fist fight.

Posted by TucsonStage.com at 11:31 AM