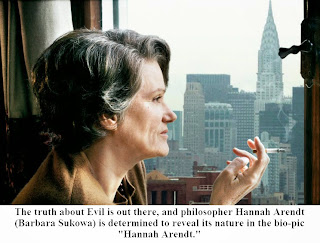 Hannah Arendt didn’t want to hate the Nazis, she wanted to understand how they could willingly be so evil – and by extension, understand the nature of evil itself. But for the world’s Jews, this wasn’t nearly enough.

In Sukowa’s performance we are willed to feel Arendt’s intellectual independence from her own Jewish culture, her detention camp experiences in France, and her post-war dedication to understanding how the Nazis could have become so powerful.

Because Arendt refused to join the mass hatred of the Nazis, she was hated for her insistence on looking deeper into the psyche of Hitler and his National Socialists. Jews and other Germans called her arrogant. She never backed down.

“Arendt” the film centers on her life in 1961 when she covered the trial of Adolf Eichmann in Jerusalem for the New Yorker. Peering with her own cold heart into the sneering face of Eichmann (portrayed using actual video footage from the trial), she sees him as “a nobody” -- a mechanical bureaucrat who separated his responsibilities to follow Hitler’s orders from his own personal responsibilities as a human being.

Philosophically, there wasn’t anything to hate. That wasn’t the philosopher’s task. Arendt famously coined the phrase “the banality of evil” to belittle the Nazis’ lack of imagination and the party’s thorough orderliness in carrying out the Holocaust.

But the violent response to her work became more intense when Arendt’s own research showed some Jewish leaders were involved as collaborators with the Germans, even to the point of sending other Jews to concentration camps.

Like every good journalist. Arendt refused to dilute her findings. The truth is its own defense.

As this political theorist found herself increasingly isolated, with longtime friends falling away and Arendt’s reputation as a scholar being threatened , the film becomes a thrilling example of intellectual courage.

Posted by TucsonStage.com at 3:04 PM