BLOODY "HAMMER OF THE GODS" 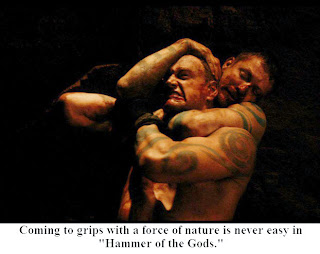 If there was a place for foreign films in the Loft Cinema’s Mondo Mondays program, a prime candidate would be “Hammer of the Gods,” a British pic presently playing in regular rotation at the Loft, 3233 E. Speedway Blvd.

Directed by Farren Blackburn (“Dr. No”) and set among the empty hills of middle England in the year 871, “Hammer of the Gods” could have used some subtitles, as well. Proper diction was not high on the list of either the angry Vikings or the harried Saxons perennially pestered by these violent Norsemen a long way from the coast.

Such harsh people lived by hard rules, never caring much for grooming or dentistry. It would be another 500 years before Chaucer penned “The Canterbury Tales.”

There is an incredible amount of violent screaming, often accompanied by thrusting swords and spraying blood. If gravelly growls and gushing gore could make a great film, “Hammer” would be a chart topper, for sure.

The main mean guy is young Steiner (Charlie Bewley), a fierce warrior intent on living the Viking Code to the hilt. While these fighters from the North were feeling the pressure of history’s nudge, they weren’t about to leave the world stage without a fight.

And it was Steiner’s dying father the king who believed the best person to lead the Vikings to one last victory in this land was Steiner himself. So the king sent Steiner to middle England to find his estranged brother Hakan the Ferocious (Elliot Cowan).

By the standards of the times, the king also thought Steiner was a little too soft to ever be a dominant physical force on the battlefield.

What’s a boy to do? Accompanied by a dozen equally ungroomed fellows, this invading horde sailed out of the fog on the English coast, landed with the force of the Normandy invasion (just on a smaller scale) and quickly dismembered the waiting farmers defending their soil.

More mayhem quickly followed as one group of Brits after another was forced to give way as these very unmerry men continued their search.

After all, Steiner had to prove himself. In those times, there was only way that could be done.

Posted by TucsonStage.com at 7:18 PM