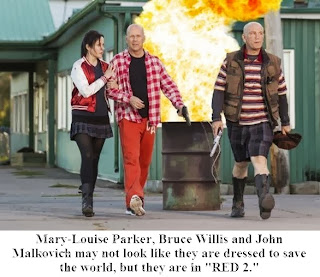 Talent doesn’t always trump charisma, but in “RED 2” it definitely does.

We remember how casting Helen Mirren, John Malkovich and Bruce Willis as retired CIA top super secret espionage agents in “RED” two years ago made that picture a super sleeper  hit of the summer. Well, now they are back.

And not only back, but having their adventures in “RED 2” enhanced by Anthony Hopkins, Catherine Zeta-Jones and Korean star Byung Hun Lee representing the forces of evil.

Adding to the mix in a much feistier role is Mary-Louise Parker returning as Sarah, the enthusiastic sidekick of Frank (Willis). As Marvin, Frank’s male sidekick, Malkovich offers more sage advice more often.

To recap a bit, after all the thrills that brought Sarah and Frank together in “RED,” the happy couple is nesting in together and buying in bulk at Costco as “RED 2” opens.

It is restless Marvin who keeps trying to get the band back together, which is when he discovers the CIA itself wants to erase Frank and Marvin because of their indiscretions in a long ago top secret project ominously named Nightshade.

Sarah is eager to get back out in the cold as an agent on the run. Frank is the one who needs convincing. A few clever script twists take care of that matter.

The digital special effects, some of them rather brilliant, begin stacking up. It turns out Bailey (Hopkins) is a troubled but genius nuclear scientist, and Katja (Zeta-Jones) is a Russian double-agent who still carries a torch for Frank.

Wonderful screen chemistry and some truly imaginative vehicle crashes blend in noisy fantasy action that makes “RED 2” one of those rare tales – a sequel superior to the original.

Posted by TucsonStage.com at 5:39 PM