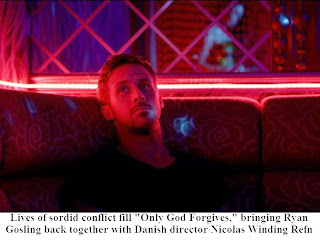 Rated R, the coldly stylized “Only God Forgives” does not display gratuitous gore so much as it builds up emotional fears of unimagined pain that come spilling out without warning.

The shock value is palpable, though it only occurs a few times. These money shots are cleverly paced in a slow-moving flow of events – heightening the shock value even further.

The morally tattered back streets of Bangkok are the setting, where sad-eyed and shuffling Julian (Gosling) runs a training gym for teens (which is actually a front for drug deals). Also involved is Julian’s more ill-tempered brother Billy (Tom Burke).

Early on, Billy becomes violent in a house of comfort girls, murdering one of those who offered comfort. Quickly enough, the girl’s father murders Billy. When Chang (Vithaya Pansringarm), a police official in tailored civilian clothes, appears on the scene he quickly extracts a penalty of his own on the girl’s sorrowful father.

On to the high-style home of Julian’s rabid mother Crystal (Kristin Scott Thomas), in a state of euphoric demands that Julian bring her the head of the man who murdered Billy.

But when Julian discovers how pitiful and distraught this vengeful father really is, Julian doesn’t have the heart to kill him.  Anyway, death would be a relief. Letting the man suffer is a punishment far worse.

Crystal is outraged. She isn’t buying any of it. She still wants the head of the man who killed her son.

These cycles of violence bore deeper into the lives of Crystal, Julian and Chang with Bangkok’s own sordid surroundings feeding the opportunities to extract more pain.

“Only God Forgives” feels excessively violent, but not in a snuff film kind of way – in a far more disquieting world where revenge without any high ground to justify it becomes even more disgusting because of such elegant (at times ) surroundings.

Remember those creepy hallways in David Lynch’s “Blue Velvet?”  Refn includes Bangkok’s version of those God-banished places, too. The mix is a heady one. So is the ritual behavior of everyone involved, predestined to be devoured by their own emotions.

Posted by TucsonStage.com at 11:30 AM