SIT UP FRONT FOR "THE WAY WAY BACK" 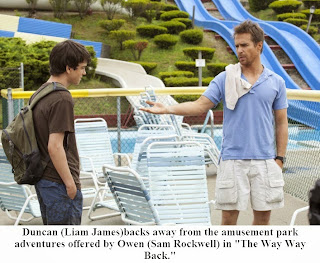 For some reason, cool kids never get their own coming-of-age movie. It’s only the awkward teens that screenwriters deem worthy.

Maybe it’s because the screenwriters were also awkward teens themselves. Maybe not, but “The Way, Way Back” written and directed by Nat Faxon and Jim Rash portray 14-year-old Duncan (Liam James) as tone-deaf to contemporary pop culture and none too happy about it.

Duncan feels like everyone else his age knows this secret language of insider hipness and he doesn’t – which makes him perpetually angry and suspicious. Isolated by his own emotions, Duncan has sunken into a near-catatonic state in the middle of summer vacation when his mom’s new boyfriend, a tough love character named Trent (Steve Carell), takes them to his summer cottage to do some serious family-to-be bonding.

Duncan’s mom Pam (Toni Collette) has the best of intentions, but we know this vacation won’t be going that well, otherwise it would be a boring movie. The catalyst is ultra-casual Owen (Sam Rockwell) a grown-up in waiting who runs a family amusement park close to Trent’s vacation cottage.

Early on, Owen spots Duncan as a worthy adolescent who just needs to get his self-confidence juiced up a little with some amusement park antics of derring-do and possibly a little romance.

“The Way Way Back” is being pitched as a quirky comedy along the lines of “Little Miss Sunshine.” Which it is, sort of.

The humor isn’t as quirky and the characters don’t resonate as deeply, but “The Way, Way Back” is still a tender and sensitively told coming-of-age tale that will feel right to anyone who got straight A’s in high school but could never master the language of those cool kids.

Posted by TucsonStage.com at 1:53 PM