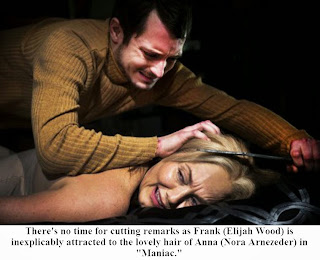 Many famous actors have extended their screen opportunities by doing extreme horror movies. But Wood must figure, why wait until the last minute?

If Wood’s strategy is to separate himself from all the Frodo-type characters Hollywood can dream up, he has definitely done it.

This “Maniac” is a remake of the lurid 1980 original, written by Joe Spinell and directed by William Lustig, that wasn’t exactly crying out for a remake. Never the less, in this update director Franck Khalfoun  takes the cutting edge of misogyny much deeper.

He also goes for the pornography approach, piling on one grisly money shot after another with little time spent in between developing characters, inner conflicts and all that other squishy stuff.

There is a backstory about Frank’s troubled childhood, which leads him to become a collector of female mannequins that he carefully restores and enhances with distinct personalities. All these plaster women need is real hair to make them come alive in Frank’s heart.

The most beautiful victim is Anna (Nora Arnezeder), an experimental fashion photographer who seems like the perfect partner for Frank’s eccentric tastes. She is the one who remains above the blood splattered fray as Frank’s compulsion for murder carries him into further madness.

Which can only mean she will become Frank’s complete obsession in the  film’s closing scenes. After all, nobody goes to a movie titled “Maniac” expecting a wholesome, uplifting experience.

Posted by TucsonStage.com at 11:29 AM