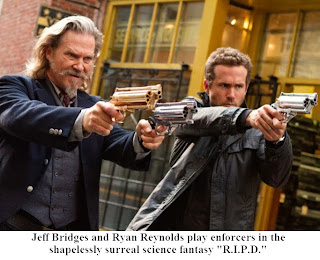 This picture is so different from anything else out there with its extreme distortions of reality and the laws of physics, any attempts to find and follow a storyline are futile.

Some critics say the problem is its terrible script and incomprehensible editing. Others blame the lack of developed characters, a meaningful scenario and the absence of willingness to establish any rules of logic.

All of these comments are true, if we assume the objective is to complete a special effects showcase movie that takes on the same basic shape as all the other special effects thrillers.

Those compulsive personalities desperate to make this mess make sense can compare it to the “Men in Black” movies. Human beings morphing into unexpected shapes that can have an emotional impact can be pretty entertaining, so long as everyone knows that the story will respect its own ground rules.

Those “Men in Black” pics are pretty good at that.

“R.I.P.D.” has no rules. Anything can happen. Up is down, down is inside-out, diagonals are curves, curves are straight, down is up, and on and on.

Freeform cinema has not ever been particularly popular in the civilized world. Actually, if you can watch “R.I.P.D.” as a disconnected digital experience, it might even be rewarding.

Also living among us are “detectives” who specialize in identifying and neutralizing (ie. blowing up) these shape shifters. In particular, Nick (Ryan Reynolds) a Boston cop who was recently killed in action, and Roy (Jeff Bridges), who was killed a couple of hundred years ago and has been chasing “deaders” (as they are called) ever since.

On the enemy side is Hayes (Kevin Bacon), also dead, who has a plan to create and then survive Armageddon.

Of course, the screenplay is based on a quite fanciful Dark Horse comic book. Maybe if you already like the comic book version, the movie version will make more sense.

Posted by TucsonStage.com at 2:53 PM