NO SILVER BULLETS FOR THIS "LONE RANGER" 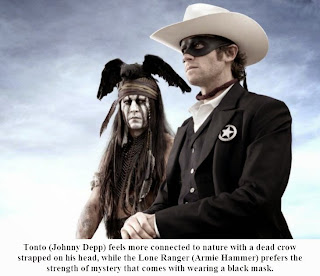 First of all, “The Lone Ranger” isn’t about the Lone Ranger. He doesn’t show up until the film’s final few minutes.

It is more accurately titled, “The Making of the Lone Ranger” --  with well over two hours of raucous special effects that pack no emotional impact whatsoever, occasionally augmented by Johnny Depp doing meaningless outtakes from his Captain Jack pirate shtick (this time in whiteface as Tonto with a dead crow squatting on his head), all to tell about how a prissy lawyer with a back east education and a burning desire to uphold the U.S. Constitution’s most idealistic attitudes figures he’ll start his career in one of the most undeveloped parts of west Texas.

The misled man’s name is John Reid (Armie Hammer), whose big brother Dan (James Badge Dale) is a genuinely talented lawman much admired by the handful of citizens settled in this unfriendly land but determined to live peacefully with each other.

The movie’s first half is already gone before Tonto (basically a renegade Indian) and the vigorously independent and naive newcomer John Reid agree they have a mutual enemy in the outlaw white men (both rough-hewn and corporate) eager to exploit those who are defenseless in the wild west.

Finally, while we are feeling battered by the carnage and also drained of dwindling patience, we are introduced to the masked man they call the Lone Ranger and his warrior companion Tonto.

Cue a cheesy arrangement of “The William Tell Overture.” That familiar hoof-pounding theme is there, but the chords and phrasing are all wrong.

What were they thinking?

Director Gore Verbinski (all the “Pirates of the Caribbean” movies) and a team of Disney corporation screenwriters miscalculated in their decision to emphasize gratuitous screen action instead of developing the Lone Ranger’s own noble idealism and Tonto’s pacifist wisdom.

Completely lost is the (too naïve?) concept that European settlers and Native Americans working together could build a modern technological society that has a genuine concern for all of its citizens.

But the biggest disappointment after watching that very entertaining preview advertising “The Lone Ranger” was Depp’s actual performance. The genius that created iconic Captain Jack Sparrow  as a pirate of the Caribbean was no more.

There would not be an iconic Tonto in crinkled white face paint with four black vertical stripes. There is no Native American counterpart for the prancing, often confused but always optimistic Cap’n Jack.

One positive note, however, is the news that today’s Native Americans appreciate the respect “The Lone Ranger” gives to Tonto’s skills and intelligence. Tonto may be played by a white man, but the historical Indian he portrays is definitely a man of consequence in the Old West.

Posted by TucsonStage.com at 4:15 PM