"TURBO" THE TALE OF A SPEEDY SNAIL 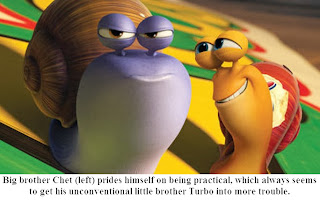 “Turbo,” from DreamWorks Animation, takes us back to the racetrack but without the endearing charm of “Cars.” You know, the one from Pixar studios.

Much will be made, no doubt, of the similarity in plot between these two pictures. In “Turbo,” a snail with an uncharacteristic need for speed dreams of winning the Indianapolis 500.

Since everyone in this snail’s social setting makes fun of him for having such a ridiculous dream, he becomes even more determined to do it. Along the way he acquires a couple of unlikely helpers and learns about the value of believing in himself.

Just like in “Cars,” the computer animation is bright, quick and quirky. The qualities of artistic style and accompanying celebrity voice-overs are excellent. “Turbo” does have an impressive amount of surface – it just doesn’t have much depth.

So, of the kid movies we’ve seen this summer, “Turbo” will be taking a back seat to “Despicable Me 2” and “Monsters University.” This three-way race for top dollar at the box office won’t be close at all.

“Tubo” could well be a hit among the 5- to 7-year-olds, however. Ryan Reynolds’ voice has a bubbly innocence that matches well with the eager garden snail that would become known as Turbo.

Paul Giamatti does the voice of Turbo’s big brother Chet, a patient fellow dedicated to following the rules and believing if it takes a village to raise a snail, first those villagers must really want to raise that snail.

Young little Turbo can’t stop complaining how all those conservative villages keep holding him back. Which doesn’t really put him on their good side. Meanwhile, the other snails in the village keep pressuring Chet to make his little brother Turbo get in line.

So right away you can see how this will be coming down. Which it does, pretty much the way you think it will.

Of course, little kids don’t have this adult insight. They can just go with Turbo’s dreams, admire Turbo’s determination to take on the world and be proud of believing in Turbo no matter what.

Although the film only runs 96 minutes and is rated PG, parents might want to stock up on a little extra chocolate for the trip. There is no double entendre in the humor, no nodding winks for the parents.

There absolutely is a valuable lesson here for children in their early school years. And this could be a popular stocking stuffer come Christmas, as well.

Posted by TucsonStage.com at 3:02 PM