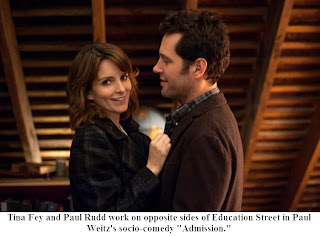 Insulting both sides in our country’s endless culture war may not be good policy at the box office, but it is reminiscent of an old saying in journalism: If you report on a controversial event and both sides are unhappy with your story, you have done a good job.

Director Paul Weitz, working from a script based on a novel of the same name by Jean Hanff Korelitz, is an equal opportunity insulter who fails for wanting to do too much. The story, really, is about the predisposed arrogance of the admissions officers at Princeton University (where Korelitz once worked).

Tina Fey plays the brittle and sophisticated Portia, assistant admissions officer who longs for a promotion to run the admissions office after the main man (Wallace Shawn) retires…which will be soon, we are told.

Portia has held this job of assistant gatekeeper protecting Princeton from society’s true barbarians for nearly 20 years. She loves the responsibility. Yet her own private life feels empty, even though she has a steady live-in boyfriend Mark (Michael Sheen) who chairs the university’s English department.

His idea of a romantic evening with Portia is to read Chaucer aloud in bed.

If “Admission” was a bona fide screwball classic, Paul Rudd would be the straight man playing John who runs an alternative high school called New Quest where teens learn how to milk cows, chop wood and hate the rich.

Pretty soon after all this gets set up. Mark announces he is leaving Portia to marry the English department’s Virginia Woolf scholar. Portia in an emotional spin thinks she is being hustled by the puppy dog charming John in a flannel shirt.

Alas, John might like to do that but in reality he only wants to convince Portia she is the mather of a graduating lad at the New Quest school.

So then we have to sit around waiting for Portia to realize the proto-Princetonians she is filtering through the college admissions system might not all have the best of intentions.

“Admissions” was lots more fun when it was just making fun of stuffed shirts and airheads. Oh, there is one more element. Lily Tomlin plays Portia’s mom, a grizzly old first-generation political activist who believes she has failed as a mother because her daughter Portia has gone over to the other side.

With her permissive parental philosophy that is way-over-the-top, Tomlin steals every scene she has.

Posted by TucsonStage.com at 2:07 PM