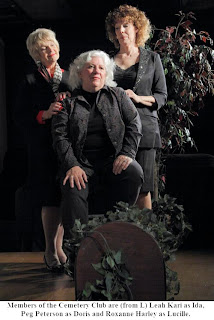 “The Cemetery Club” is a Neil Simon-esque play by another successful TV writer, Ivan Menchell (“The Nanny,” “Time of Your Life”).

The one-liners rife with Jewish culture are hilarious. The heartfelt part that is supposed to move the audience to something besides laughter doesn’t work as well. But the cast takes this play and runs with it

Sheldon Metz as director keeps them gassed up and going. Peg Peterson and Roxanne Harley share the driving, taking this story of memories, affections and obligations through all the curves with a theatrical élan that builds satisfaction.

That title refers to the three widows Lucille (Harley), Doris (Peterson) and Ida (Kari) who meet at the same time each month to visit the graves of their husbands. They get together lots of other times, as well, which is where most of the story takes place.

Lucille is the sexually restless one, always with her eye out for a new guy who might find her interesting. Doris is the sincere and sentimental one.

Ida, though her character is as well defined, is the friend who helps keep the balance in their little group.

If their mix of personalities seems a bit contrived in order to set up jokes and conflicts, they also provide nice contrasts which give the conversations some texture.

Finding purpose in a life without their husbands is a recurring theme, though not a morbid one. Ultimately, it is their bravery we admire.

The three friends all live in Queens, New York, and the cemetery is Forest Hills. For audience members familiar with the area, some of the jokes will have a little more resonance.

Serving as kind of a catalyst is Woodson as Sam the unassuming butcher who also visits his wife’s grave regularly.  A smaller role given considerable energy by Rauschen is Mildred who is seen by the three widows as a threatening outsider.

This is the same “Cemetery Club” that was adapted to the screen in 1993, starring Olympia Dukakis, Ellen Burstyn and Diane Ladd.

Due to popular demand:


Posted by TucsonStage.com at 9:37 PM