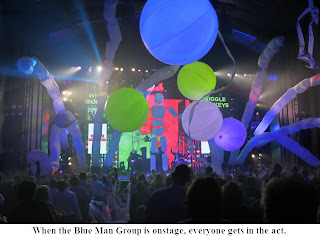 A vibrant display of our digital future is connected directly to the Blue Man Group’s colorful past in the production Broadway in Tucson has brought to the downtown Music Hall this week.

Performed at rock concert volume without an intermission, these three azure artistes -- augmented by two more percussionists plus keyboard and guitar -- bridge the distance between a hippie happening and an all-ages dance rave.

For those who haven’t seen BMG before, prepare to be thrilled by an audio assault of deafening dexterity that can sweep you up in a tidal wave of fun. Or just turn off your hearing aid and enjoy all that joyful movement.

Veterans of the scene will find the grand finale even more grand, a giant whooshing rush of throbbing rhythm, crazy quick lighting effects and steroid beach balls that keep changing colors in mid-air.

No wonder fans keep coming back for more…and more. That climax is irresistible.

There being kind of a garden variety school of analysis about what every Blue Man show means in terms of the BMG’s ongoing dedication to exploring that more-than-quantum link between art and technology, start with this: the show is designed for a generation that eagerly embraces multi-tasking with a macho attitude of  I can do more things at once than you can…especially if I have a cooler-than-you digital device that has an aggressively bright touch screen (even if you can’t reach out and touch someone individually, you can always reach out and touch your own screen).

Central to creating this effect is the stage design of three identical giant-sized (about 10 feet tall) smart phones done in that combination cell phone/tablet style, each with a screen full of icons for various apps.

Have smart phones become such a big part of our lives?  If you have to ask, you’ll never know.

But the best metaphor is when each Blue Man disappears into his phone, literally. Then his face pops out, then he’s quickly drawn back in. Who is the master here, and who is the slave?

As for tradition, several bits include those mad musical instruments made from various lengths and diameters of PVC pipe. There’s just something about the primitiveness of these instruments and the robotic way they are played that always connects to the tribal part of everyone’s brain.

And yes, all the marshmallow tricks and bursts of Captain Crunch breakfast cereal are in there, too.

Posted by TucsonStage.com at 2:40 AM