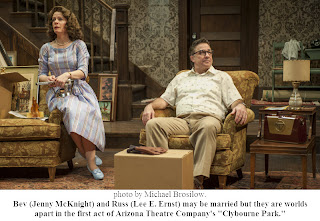 We aren’t any closer to the solution, but we are becoming more aware of how much intransigence permeates the problem. Yes, we are speaking of the distance separating racism from integration.

You might think the space is becoming smaller, but that is only on the surface. Beneath the smiling white people and the wary black people deep issues of distrust remain as divisive as ever.

In “Clybourne Park,” Pulitzer Prize-winning playwright Bruce Norris puts a heavy coating of comedy on his ruminations about what makes the problem so robustly defiant 50 years after the modern civil rights protests began.

Arizona Theatre Company has turned out a thought-provoking as well as snarly co-production working in tandem with the Milwaukee Repertory Theatre. Mark Clements is director.

There are plenty of deliberately rough corners and tense moments for audience members of both races – liberal and conservative alike.

Developing some historical perspective, it is easy to imagine how black people want to grab as much advantage as they can, and who can blame them. While white people want to give up as little as possible while making a great show of all they have done for black people.

The sadness of this play is that it is eloquent testimony to how little progress has been made in healing the racial divide in this country.

Sometimes we forget how far apart we really are. “Clybourne Park" is here to remind us.

As inspiration, Norris returns to Chicago in the disputed home we first saw at the center of Lorraine Hansberry’s “A Raisin in the Sun” set in 1959 (ATC presented a winning production four years ago).

Once again Karl (played by Gerard Neugent this time) steps up as the concerned member of the white community who wants to block the sale of this home to a black family.

But “Clybourne Park” is a much different play, and has the 21st century in mind when its message comes around in the second act.

During intermission, the nicely kept 1930s Archie Bunker-looking home is turned into a trashed out, graffiti scrawled meth-looking house of squalor.

When the second act begins it is 2009. The same cast that filled act one now returns in different roles, emphasizing the 50 years that have past through this urban scene.

The area has fallen into such disrepair as a black neighborhood that young white adults want to move in and fix everything up. They are tired of living way out in the suburbs. Gentrification, we call it these days.

Neugent returns as the young progressive Steve who wants to tear down the place and build his own multi-story mini-mansion.

But Lena (Marti Gobel) and Kevin (Anthony Fleming III) have had the home in their family for the past 50 years and oppose this destruction.Lena demands respect for its heritage as the first black-owned home in the area.

Much disagreement ensues, which will have a particular poignancy for Tucsonans who remember the large swath of downtown residences that were torn down in the name of urban renewal in the early 1970s.

As a theatrical experience that will have you thinking and feeling an urgency to talk about it afterward, “Clybourne Park” tops anything else presented anywhere locally in recent memory.

“Clybourne Park” continues through April 27 at various times Tuesdays through Sundays in the Temple of Music and Art 330 S. Scott Ave. Tickets are $32-$89 with discounts available, including $10 seats for students. For details and reservations, 622-2823, www.arizonatheatre.org

Posted by TucsonStage.com at 6:29 AM