CHRISTMAS IS CHRISTMAS AT GASLIGHT 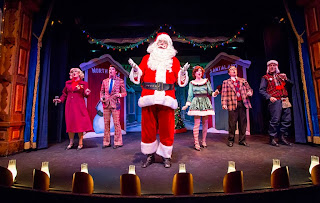 When it comes to the winter holidays, Gaslight Theater flaunts being politically incorrect! This is one place where everybody loves to say “Merry Christmas.” They never go for the ecumenical or euphemistic Happy Holidays or wish their friends Season's Greetings.

Christmas is Christmas!...and so is having a Cool Yule.

Which brings us to the exceptionally high-energy Gaslight production of “The Secret Santa: A Holiday Musical Comedy.” Santa has a most beautiful snowy-white beard and a laugh so jolly even Ed McMahon on the old Johnny Carson show would be envious.

“Secret Santa” is so energetic...(how energetic is it?)...even the villains do a lot of singing and jumping around. Todd Thompson has got to have one of the best voices in a three-piece business suit as Barkley Simpson, manager of the C.C. Cogsworth Toy Factory in Merryville, U.S.A., back in the early 1960s.

Simpson is so mean...(how mean is he?)...he even stops dancing so he can kick the teddy bear sitting innocently in a pile of toys right next to the factory's assembly line.

Cast as sort of an assistant villain is Brian Hale as C.C. Cogsworth himself. As the story opens in Merryville, Cogsworth has been convinced by Simpson that toys aren't the market they once were.

Cogsworth is going to keep a close eye on the business reports for this Christmas. If the factory doesn't turn a profit, he is going to convert that assembly line from toys to...lawnmowers!

Well, you can quickly see where this is going. If the toy factory closes down, then Merryville won't be able to have its annual Winter Carnival featuring Santa Land.

And if that happens, well then, Merryville just won't be Merryville any longer.

Standing up for justice and demanding “the best Christmas ever” are loyal toy factory employees Franklin (Mike Yarema) and Buster (Jake Chapman). Franklin is responsible for keeping the assembly line running smoothly, while Buster flaunts his practical knowledge of mechanics as Head of Plant Maintenance...and master of horrible puns.

Torn between loyalties to doing the right thing or keeping her job at the toy factory is the distraught office secretary Olive Plunkett (Erin Thompson). She keeps pouring out the energy onstage as well.

Stepping in to provide a note of media cynicism is the local news reporting team of Biff Wellington and Cindy Lou Culpepper, who take superficial reporting to brilliant depths of shallowness. At my performance, Jake Coffin and Heather Stricker had the roles.

As you might expect, there is also a key part for the big guy from up north, K.K. himself, the jolly old elf, Santa Claus (after all, his name is in the title of the show). So why is that a secret? Well...um...it would be against the Theater Critics' Code to reveal that information.

There's also Santa's loyal helper, Holly. David Orley and Janee Page are the actors I saw. All the roles are cast with multiple actors, with many days having multiple performances.

But wait, there's more. The traditional aftershow olio is dedicated to that TV favorite “Happy Days,” with lots of familiar characters wearing letter sweaters amd full skirts lined with crinoline petticoats. Arnold who runs the malt shop is there and, of course, the Fonz.

"The Secret Santa: A Holiday Musical Comedy" runs through Jan. 4 with up to four shows daily at various times. Reservations are a must. Tickets are $18.50 general admission; $16.50 students, seniors and military; $8.50 children 12 and under. For details and reservations, 520-886-9428, or visit www.thegaslighttheatre.com

Posted by TucsonStage.com at 7:18 AM