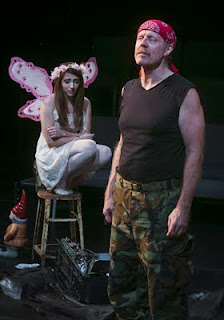 Life would be a lot more fun if it wasn't for all those rules, and all those authorities ordering everyone around 24/7. They just don't ever stop, do they.

That's the observation holding the key to Rogue Theatre's brilliantly jaunty, cheeky and otherwise English-quirky production of “Jerusalem” by internationally hot British playwright Jez Butterworth. The title is supposed to have some connection to William Blake, I believe, but frankly it is a rather weak one.

But not to worry about the bona fides of such pedigreed literary references. “Jerusalem” is the kind of play you can enjoy whether you understand it or not. Particularly in this exuberant production directed by Cynthia Meier.

Butterworth has the gift and the power to write dialogue that can carry you along on a wave of bubbly energy shouting “Freedom! You know you want it!” with such conviction you start thinking about starting a sit-in someplace soon as the play is over.

But getting to the end of “Jerusalem” isn't as easy as you might think. It has three acts and runs well over three hours, plus two intermissions (plan your in-theater snacks accordingly).

Both are playful sorts, living on the dreams of others. Rooster encourages local teen layabouts with alcohol and drugs to keep ignoring The Man and all those encroaching rules of society. Wesley works the other side of the street, selling pub brew to responsible villagers who still need to escape the responsibilities of home and hearth now and then.

Swirling around Rooster is a defiant quintet of boys and girls, some younger than 15, who feed on the freedom he provides in his woodland squat cluttered with trash and disheveled bits of furniture. Spontaneous expression is their lifestyle, stirred in with the pleasantly disorienting behavior we associate with altered states of consciousness.

There is also a breezily baffled professor played by David Greenwood with just the right degree of being disconnected from reality, probably from the stresses of academic life.

The gist of “Jerusalem” is that Rooster has been ruling his roost for misspent youths for far too many years. The proper and respectable town folk have finally had enough and, besides, a land developer wants to fill up this tawdry bit of woodland glen with a host of shiny new apartments.

It's morning when the play begins. A pair of government officials come in to post an eviction notice on Rooster's rundown trailer. The rest of Act One is just a series of miscellaneous skits by the kids, building up a personality for each through their erratic behavior, meanwhile emphasizing Rooster's defiance of his impending eviction.

The cast members are Ryan Parker Knox as Ginger, a bit older than the others and consequently either sadder or more dangerous (depending on your point of view); Connor Foster as Davey, also a bit older; diminutive Nathan Oppenheimer as Lee, a young loner who insists he is leaving for Australia; Gabriella De Brequet as Tanya with a harlequin's spirit; and animated Holly Griffith as the goofy Pea.

Most poignant in a small but significant role is Sara Mirasola playing the fairy-ish Phaedra, who makes an appearance at the beginning and at the very end.

Also bringing some serious heft to the pivotal personality of Troy Wentworth, an angry parent, is the terrifyingly intense Terry Erbe.

What makes the Rogue's bold production of “Jerusalem” so significant is Meier's ability to bring out the rugged metaphors Butterworth has laced into this masterwork. Shakespearian in scope, the social forces of a diminished England nevertheless refuse to be humbled.

The spirit of greatness definitely resides within Rooster, a proud man of his time who just happened to be born into a rather grubby generation when there were no circumstances for greatness.

There would be no white whale for Rooster, no fearsome French foe or dark continent to conquer. There were only those two petty government officials with their eviction notice.

Posted by TucsonStage.com at 5:22 AM