"FLASHDANCE" A WORK IN PROGRESS 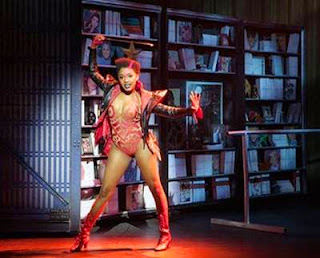 Brianna-Marie Bell as Kiki shows what she's got in "Flashdance -- the Musical."

“Flashdance” comes to Tucson with lots of baggage. Ever since a British production in 2008, co-writer Tom Hedley (who scripted the movie) and others have been trying to get on Broadway with their stage adaptation of the 1983 film starring Jennifer Beals.

Writer/director Sergio Trujillo has put together the version brought to Centennial Hall by Broadway in Tucson for a week of performances. But on opening night , the show still didn't look ready for prime time.

As it plays right now, the creators have kept four pop hits from the movie – “Maniac,” “I Love Rock 'n' Roll,” “Gloria” and “What A Feeling” – to which has been added 16 new songs by Robbie Roth and lyricist Robert Cary. Then the company spent a couple of years on the road, working and re-working everything, and twice postponing their Broadway debut.

What was missing on opening night in Tucson is the “pop,” the X-factor, that special something that screams “I'm ready for my close-up in the Big Apple!”

Trujillo has done well on Broadway with other shows, particularly “Jersey Boys” and “Memphis,” but has yet to find the magic button for “Flashdance.” It could be these guys are just trying to be too many things to too many people.

Choreographically “Flashdance” takes its audience from a sweaty factory to a sleazy nightclub to an even sleazier nightclub to a prestigious Pittsburgh dance academy to the triumphant free-style solo dance that wins the audition for ambitious Alex.

The heart-felt message, of course, is to have the courage of your dreams, take a deep breath and go for it! No surprises there.

None of the choreography contains any surprises, either. While that sillhouette “Flashdance” image of the provocatively posed dancer getting doused by water is now iconic in pop culture, nothing in the new material comes close to matching that.

The story, just like the movie, follows street smart and intuitive Alex (Karli Dinardo) who works by day in a Pittsburgh steel mill and by night struts her sexiest stuff in a night club (while remaining discreetly clothed) as she dreams of becoming a real ballet dancer.

There she gets involved with Nick (Adam J. Rennie), handsome son of the factory's owner and next in line for the presidential suite.

Dinardo and Rennie are both from Australia, following their own brave dreams of singing their way to stardom just like Olivia Newton John (“Grease” the movie).

But winning my personal award for brightest and bounciest is Heidi Friese as Gloria, BBF of Alex. In the story it is Gloria who gets distracted by the seductions of life on the dark side.

“Flashdance” does look great, with an amazing set of many moving panels and rear screen projections. The scenic design by Klara Zieglerova establishes a positive tone that anything can happen. Costumes, particularly in the various nightclub scenes, are provocative, as well.

So here's the bottom line.

If you loved the movie, and don't get to see many theater musicals, go see “Flashdance.”

If you're a married guy who enjoys watching young women in scanty attire do a little dancing, go see “Flashdance.”

If you want to tell people you saw this show when it was still a work in progress, go see “Flashdance.”

Posted by TucsonStage.com at 10:00 AM