Use it or lose it, county tells city of arts center

Use it or lose it, county tells city of arts center


Respond: Write a letter to the editor | Write a guest opinion 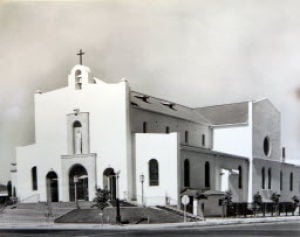 The 93-year-old All Saints Catholic Church building was acquired by the city as a performing arts center, but has fallen into disuse and disrepair.
Enlarge Photo
Pima County wants the city to live up to its promise to operate a downtown performing arts center, or turn it over to the county.
Back in 2007, the two governments entered an agreement to repair the historic former home of the All Saints Catholic Church, located at 408 South Sixth Avenue.
In exchange for $668,360 in Pima County bond money for foundation fixes, the city agreed to maintain and operate it.
But the building fell back into disrepair.
“Despite the City’s commitment,” County AdministratorChuck Huckelberry wrote in a letter to the City, “the building remains vacant, unused and vandalized.”
Huckelberry asked the city to either turn over the building, refund the county’s money or take steps to repair and open the building.
“We’re not going to waste $600,000 so let’s fix it up and get a user in there,” Huckelberry said. “We don’t want it to go to waste.”
Huckelberry said failing to address the outstanding issues could jeopardize the additional $1 million the city is seeking for the building in the 2015 bond proposal.
Some on the council weren’t enamored by the idea of ceding the property to the county.
“It’s just a land grab by Huckelberry,” Councilman Steve Kozachik said. “He continues to forget our taxpayers are his taxpayers. He needs to get over the idea that he's doing us a favor by recirculating Tucson taxpayer money back into the City.”
Mayor Jonathan Rothschild said he has reached an agreement, in principle, with Huckelberry over the building Wednesday afternoon.
In exchange for including the project in a successful future bond package, the city will agree to open the doors to the public.
“That’s an important property for the arts community and a historic property,” Rothschild said. “And we need to restore it and put it to public use.”
If voters don’t approve the bond package, Rothschild said the two sides would have to look at other options.
Huckelberry couldn’t be reached to confirm the agreement.
The city purchased the 1921 building in 1989, remodeled it and operated it as a theatre over the next decade. But it closed in 1999 and remained empty ever since.
Contact reporter Darren DaRonco at 573-4243 or ddaronco@tucson.com. Follow on Twitter @DarrenDaRonco
Posted by TucsonStage.com at 4:56 PM