"DEATH OF A SALESMAN" FILLED WITH MODERN LIFE 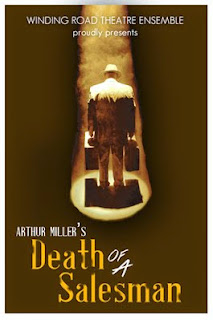 It doesn't take much imagination to see the connection between Willy Loman's death of a salesman in 1949, finished off by the rapid cultural changes following World War II, and today's wage earners in their middle 50's treading water and fighting off panic in a turbulent sea of changing digital technology.

Arthur Miller's classic and remarkably prescient play “Death of a Salesman” has been given a powerful production by the Winding Road Theater Ensemble, with tall and broad shouldered David Alexander Johnston as Willy the salesman who believed in the power of being greatly liked, but no longer finds he can ride a smile and a shoeshine to success as a salesman.

For one thing, most of the people who liked him so much are dead. Their sons run those businesses and they are reading books on business theory and the effectiveness of subliminal advertising. All the European geniuses of wartime propaganda have gone into the advertising business with lots of new ideas.

Willy loved the old ideas, but they aren't working anymore. Those proud shoulders have been slumped by forces he doesn't understand.

She makes the speech that “attention must be paid.” That her husband may not be a great human being, but he was loyal to his company for 36 years, worked hard for that company and should have earned his employer's respect.

Instead, Willy is being tossed aside.

The echoes of today will make you shudder. Unsentimental Republicans have just been elected to all the good jobs. Will they suddenly become more concerned about the hard workers who, through no fault of their own, suddenly find themselves facing their senior years without much money?

The roles played by Wood and Parra have some valuable messages for the younger generation, as well. Wood as Biff thought being well liked in high school as a football hero would take him far. He had no idea what a kind of success would suit him in the adult world. All he really knew is that he wanted to make his father proud – but that wasn't working out.

Parra as Happy was a little more resigned to life in a faceless society, he didn't need to be strong-willed or independent. But he definitely wanted more.

Roger Owen shines as the ego-driven Ben, Willy's brother. An alpha male of the first order, Ben ran away to Africa when he was 17 and walked into the jungle. Four years later he walked out a wealthy man. Using body language and a commanding voice, Owen creates the completely believable persona of a man who could do exactly that.

The director is Glen Coffman.

With limited stage and lighting effects in the Cabaret Space at the Temple of Music and Art, Coffman has created a sound design that helps add details in the mind's eye of the audience. But the play's active ingredient really is the language. Miller's writing is so rich, his imagery filled with gripping shades of insight that will wrap up your brain and refuse to let go.

Serious theater demands attention, and attention must be paid.

“Death of a Salesman” continues through Nov. 23 with performances at 7:30 p.m. Fridays and Saturdays, 2 p.m. Sundays, upstairs at the Temple of Music and Art, 330 S. Scott Ave. Tickets are $22, with discounts available. For details and reservations, (520) 401-3626, or www.windingroadtheater.org

Posted by TucsonStage.com at 5:53 PM