"ADORE" IS A SWEETLY GUILTY PLEASURE 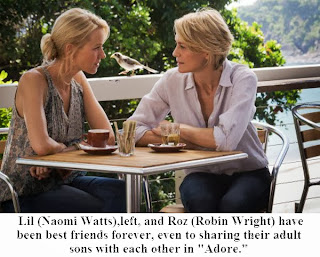 Although the dueling mature beauties are played by Robin Wright and Naomi Watts, the rest of the production is rather international. Anne Fontaine, the director and co-writer, was born in Luxembourg. Nobel Prize-winning Doris Lessing, who wrote the script and the novella, is from Persia (now Iran).  Most everyone else lives in Australia.

The overwhelmingly lovely ocean lagoon setting is in New South Wales and, we hope, looks just as seductive today as it did when this picture was filmed. Only two homes face the lagoon, both large and airy places, where two families have lived happily for decades.

Most especially Roz (Wright) and Lil (Watts), who grew from perennially bronzed girls in the water to best friends with husbands. Each also has an equally handsome adult son and graceful surfer. They are Tom (James Frecheville) and Ian (Xavier Samuel).

Tom’s mom is Roz, whose husband is a university professor.  Lil’s son Ian feels a little more responsible after his father dies without warning soon after the movie begins.

So it seems natural enough (so to speak) that Ian should find himself attracted to Roz. After all, on this idyllic bit of sheltered cove, there are no other people. We don’t know how far Ian would have to travel to find a sun tanned beauty his own age.

Roz isn’t about to help him figure out that one.

So, when Tom learns of his mother’s hook-up with Ian, quick as a flash Tom puts his best moves on the widow Lil.  Certainly we are sympathetic to Lil’s needs, even if Tom does seem to be somewhat motivated to avenge his mom’s wandering eye.

But, heck, this movie is only getting started. Once both young men learn of their own mothers’ indiscretions, the moms are quick to calm their offspring’s anger.

These two mothers and sons quickly agree, for the sake of their future happiness, they will just continue these unusual but mutually satisfying arrangements.  The husband of Roz, a rather taciturn Ben Mendelsohn, is seen now and then but never disturbs this accommodating arrangement.

That’s when the sensual and openly sexual fantasies of women from the generation of Wright and Watts begin to blossom in the movie theater without shame or regret as these relationships deepen on the big screen.

Standing in the wings, there is a piper still to be paid, but the price is not in pounds of morality. Rather, it is something much deeper.

Posted by TucsonStage.com at 5:20 PM