"THE IMPORTANCE OF BEING EARNEST" IS 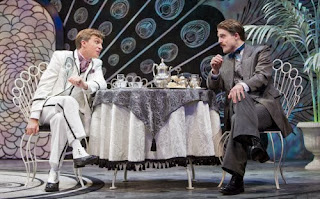 A spot of tea and a lot of deception between Algernon (Matt Leisy), left, and Jack (Loren Dunn) make for both laughs and insight in "The Importance of Being Earnest." .

Was the pretense of propriety during Victorian times in England any more artificial than the pretense in America today that there is no more racism?

It is a matter worth considering, and there would be no better time than while watching the Arizona Theatre Company’s lively production of “The Important of Being Earnest.”

No less a wily commentator on contemporary cultural matters than Oscar Wilde provides the puncturing of homophobic England’s upper crust superiority in 1895 when he wrote this modern classic.

ATC’s own Stephen Wrentmore, who grew up in London, directs this production with the stated aim of making Wilde’s observations relevant to right now.

Wilde’s own flamboyant lifestyle stretched “acceptable behavior” beyond the breaking point, sending him to prison for two years on charges of being homosexual and, in the experience, effectively destroying his life. In real time Wilde lived out his love/hate relationship with Victorian fashions both moral and material.

Deceit is at the “light-hearted” center of this comedy of manners which Wilde described as treating serious things with triviality and trivial things with the utmost importance.

But Jack also has a secret life as Ernest the scandalous pleasure seeker in London. Frequently Jack excuses himself from his straight life in the country to return to London where he must rescue his “brother” Ernest, who is always in trouble.

Of course, while Jack is in London he is living the extreme life he attributes to Ernest. In fact, he is Ernest.

But the thing is, cosmopolitan Algernon in London is best friends with playboy Ernest. Algernon doesn’t know about Jack the proper property owner who lives in Hertsfordshire.

But that’s not so bad because Algernon has created his own double life pretending he must get away to the country now and then to look after an invalid friend named Bunbury. There is no real Bunbury. That is only Algernon’s excuse to escape any unpleasant appointments that come up in the city.

Wrentmore nicely accommodates this comparison to modern times by giving Algernon a fey manner which contrasts nicely with the more dashing Ernest/Jack.

The twist gets an added turn when Jack discovers Gwendolyn is convinced the name Ernest describes manly men of tremendous confidence. An echo of this fascination is tossed into Algernon’s relationship with Cecily, who also finds the name Ernest appealing.

The interest is compounded when both Algernon and Jack decide to get their names officially changed to Ernest.  Oh my…

The casting is remarkably even, with each actor contributing the appropriate demeanor and accent.

Sound in the theater was a problem, however, as much of the dialogue got lost in the seats toward the back of the theater under the balcony. Everything seemed rather muffled.

Which made the formal set designs and detailed costumes by Yoon Bae more welcomed in sorting through these witty misadventures which Oscar Wilde constructed to frame his observations of trivial importance in Victorian times as well as those important trivialities.

“The Importance of Being Earnest” continues through Oct. 5 at the Temple of Music and Art, 330 S. Scott Ave., with performances at various times Tuesdays through Sundays. Tickets are $36-$77. For details and reservations, 622-2823, and www.arizonatheatre.org

Posted by TucsonStage.com at 2:03 PM