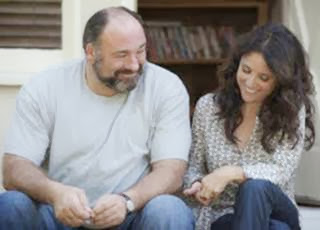 There’s a lot more to mid-life romance than flowers and candy. That’s the center of Nicole Holofcener’s reality-based film “Enough Said,” now playing at the Loft Cinema 3233 E. Speedway Blvd. The late James Gandolfini and the perennial Julia Louis-Dreyfus star as genuine adults looking for love in all the wrong places.

Other reviewers have noted a similar tone to Woody Allen’s Manhattan favorites such as “Annie Hall” and “Manhattan.” Similar in that all the people seem to live in the same befuddled demographic grappling with the emotional confusions, self-deceptions, uncertainties and misguided decisions that can torment otherwise bright and sensitive people.

Is this better than the mumble core films of a younger generation? If you are already older, maybe “Enough Said” would feel more comfortable.

Gandolfini in one of his last screen performances is certainly a lovable bear of a guy and genuinely good-hearted in trying to decide if a September romance is his best way to go.

Louis-Dreyfus, maturing from her Seinfeld days, is a more neurotic version of Allen’s favorite female actresses. Louis-Dreyfus has more than a touch of Allen’s own stuttering dufus character. Generally this makes her more endearing, certainly more approachable as she fumbles her way toward love in a time of melancholy.

The story is set in west Los Angeles where Gandolfini plays Albert, curator of a television film archive. He’s divorced and has a daughter about to leave home for a college back East.

Louis-Dreyfus plays Eva, a masseuse who makes house calls. She is divorced and her daughter is about to leave home for a college back East.

Apparently, Stanford University just wasn’t good enough for either of them.

That title refers to the difficulty everyone in the movie has of knowing when to stop talking, to stop ruining a good impression, to reveal too much about a bad experience, that sort of thing.

The set-up begins when Eva attends a nice civilized party full of strangers and purely by chance, it seems, meets her new best girlfriend Marianne (Catherine Keener) and the rollie-pollie Albert, who’s fun to talk with.

Unknown to Eva, Marianne and Albert were once married to each other. So we watch and smile as Eva listens to Marianne complain about her ex-husband’s faults.

And then Albert starts telling Eva about his ex-wife’s faults. All the while, Albert and Eva keep picking up on each other’s idiosyncrasies, silently wondering to themselves if any of these are deal-breakers.

“Enough Said” is definitely a female flick, good for bonding buddies on a weekend afternoon. It could be a good date movie for that elusive middle-age audience, too, but only if the guy is a big fan of Gandolfini. The actor does deliver a fine performance.

Posted by TucsonStage.com at 7:21 AM