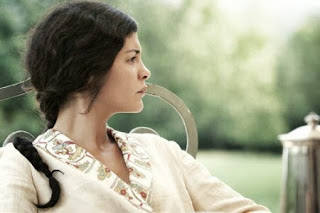 The message is a good one and the French film “Therese” directed by Claude Miller, now playing at the Loft Cinema, 3233 E.Speedway Blvd., is certainly sincere. But the casting of our bubbly innocent Audrey Tautou in the title role was a mistake. An actress with a doleful face and basset hound eyes would have been much better.

Of course Tautou would like to be known for doing more challenging roles in her career. What great artist wouldn’t?

Remember 10 years ago when Charlize Theron turned her strikingly beautiful appearance way down to portray the frustrated and depressed serial killer Aileen Wuornos in “Monster?”

The transformation was jaw-dropping. But was it really necessary? There are plenty of great actresses who are already ugly. Just get one of them to play the role.

Theron, of course, has big box office muscle. So does Tautou…but still.

The Audrey we see in “Therese” is not the Audrey we loved instantly in “Amelie.” In fact, she is just the opposite in this adaptation of the 1927 novel (considered scandalous at the time) by François Mauriac. Much of the scandal came from the author’s portrayal of two families of fine French citizens as having very little character to admire.

That valuable lesson begins with Therese feeling superior because of her exceptional intelligence. She resents having to stifle all the thoughts that keep filling her head.

But being a responsible person who wanted to do the right thing, she not only quenched her desire for more knowledge but also agreed to marry Bernard (Gilles Lellouche), the handsome son of the millionaire property owner next door – thus combining the fortunes of both families and controlling a sizable portion of France itself.

Alas, this is where the tragic lesson begins. Therese’s lovely face becomes a sullen mask from which no emotion escapes. Implied in her refusal to respond to anyone is the emotional time bomb building inside her.

As this conflict keeps seething, Miller the director seems to linger more on the outside propriety of actions and fashions that surround Therese: the elaborate costumes both male and female, the elegant furnishing, the servants’ attention to detail so that nothing is ever out of place.

Within this picture perfect home on a lovely estate famous for its pine forests, Therese’s personality is crumbling away. So when the opportunity comes along purely by chance to poison Bernard, she can’t resist.

But that isn’t the end of the story. Nor will it be the end of Therese’s suffering.

Posted by TucsonStage.com at 6:59 AM