In this play, at least, it often seems like Pulitzer Prize-winning playwright Paula Vogel’s idea of female liberation is for women to act as badly as men. In essence, letting the behavior of men decide the attitudes that shape these females. 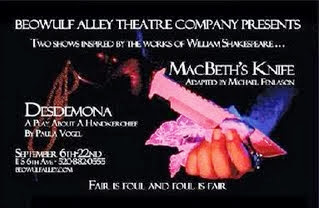 The three women acting outtheir roles in the Beowulf Alley Theatre Company production of Vogel’s “Desdemona: A Play About A Handkerchief” can’t be blamed for any of this. They are only presenting the play, as directed by Nicole Scott, who also plays the role of Bianca.

As you recall, in Shakespeare’s tragedy “Othello,” it is the innocent Desdemona who is done in by the unfortunate placement of a handkerchief, which outrages Othello.

It isn’t really necessary to be brushing up on your Shakespeare in order to appreciate the subtleties of the playwright. There aren’t any subtleties.

Desdemona has been turned into a generous companion offering her favors to nearly all the soldiers in Othello’s camp. Emilia the wife of Iago is shocked and disapproving of such uninhibited actions. Bianca, as you might imagine, is now the madam of a house of ill repute (as folks used to say).

In the script, Vogel has instructed each of these women to have a specific accent. Desdemona will adopt a proper British tone, Bianca will use Cockney slang and Emilia will be Irish.

None of this works out too well on the Beowulf Alley stage. Candace Bean as Desdemona only occasionally hits the right note. Scott as Bianca gives her Cockney speech a kiss and a promise.

At the opposite extreme, Diana Ouradnik as Emilia embraces her Irish brogue with such enthusiasm she is often unintelligible. Quite probably, however, her accent is completely accurate.

So even if the playwright has rearranged this trio of relatively minor characters so they have completely different personalities from what Shakespeare’s lines would suggest, we still know Desdemona must come to no good in the end.

So the tension, really, is in staying a step ahead of the characters trying to figure out how their bawdy conversations will eventually fit into the Bard’s larger structure.

Meanwhile, Vogel leaves us with the impression that the women in Venice, at least when they think no one is listening, have conversations amongst themselves that are consumed with sex.

Lovers of Shakespeare will not find too much comfort here. The performances are adequate enough, but Vogel’s agenda is not to heighten our appreciation of “Othello,” or of Desdemona, but to use the reputation of “Othello” as Vogel’s platform for making her own political statements.

“Desdemona: A Play About A Handkerchief” continues in repertory performances with “MacBeth’s Knife,” another adaptation of a Shakespearian work, through Sept. 22 at Beowulf Alley Theatre, 11 S. Sixth Ave. “Desdemonia” plays at 7:30 p.m. Saturday, Sept. 14, and Friday, Sept. 20, also at 2:30 p.m. Sunday, Sept. 22.

Tickets are $20 general admission, $18 for seniors, military and teachers. For reservations, 520-882-0555. For details, www.beowulfalley.com

Posted by TucsonStage.com at 9:03 PM