MAGIC, MYTHOLOGY FILL"MISTAKE OF THE GODDESS 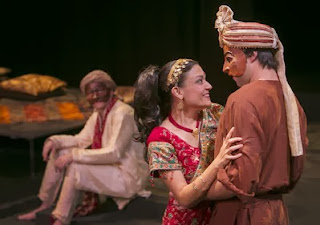 --all photos by Tim Fuller--

If you like to believe in the magic of life and the mythology of love, absolutely see The Rogue Theatre’s production of “Mistake of the Goddess (Hayavadana)” adapted from an 11th century collection of Sanskrit tales by the modern playwright Girish Karnad. It is said this is one of India’s most celebrated modern plays. 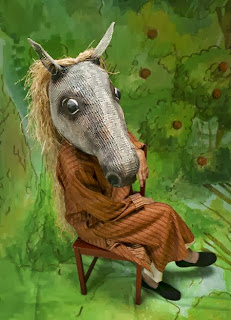 Metaphor reins as the poets of those times so many centuries ago sought ways to portray the complicated psychology of the human heart. Or is it the human head? And what about the human body with its passionate demands for food and love?

Such mysteries confound understanding as defiantly today as they did a thousand years ago in the equally mystical land we know as India. From time to time gentle recognition of this very timelessness bubbles from the contemporary humor that springs out of the script so naturally.

A love triangle is at the center of this philosophical adventure, but a love triangle of a different sort. Thomas Mann based his 1940 novella “The Transported Heads” on this same story. He felt the head must rule the body.

In Karnad’s hands, we learn Devadatta (Ryan Parker Knox) and Kapila (Matt Bowdren) have been best pals forever. Devadatta is the smart, sensitive one. Kapila is the bold and athletic one. Taken together, these qualities create one remarkable man. 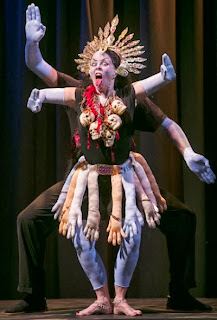 Patty Gallagher (front) and David Morden team  up to portray the goddess Kali.

So, in a way it isn’t unusual that both of them should fall in love with the same woman, Padmini (Marissa Garcia), who couldn’t be happier.

Complications ensue when Padmini marries Devadatta (after all, a somewhat predictable man with prospects for a successful future is a much better bet than the spontaneous guy who is really sexy) which crushes Kapila’s spirit.

Now Padmini is the anguished one. Enter the goddess Kali (Patty Gallagher) an animated spirit who brings both men back to life. But alas, the heads get mixed up in the process so Devadatta the intellectual returns with Kapila’s head, and Kapila the stunning athlete now has Devadatta’s head.

There is a subtle implication that Padmini does this on purpose because she wants to enjoy the intelligence of Devadatta as well as the vigorous strength of Kapila.

All of this happens before intermission, setting up the question both men have about exactly which one is Padmini’s legal husband.

A wise man in the region pronounces the head to be the dominant part of the body, Devadatta with the strong body of Kapila returns home with a very joyful Padmini.

These re-arranged heads and bodies of Devadatta and Kapila are clearly presented using formal face masks covering all but the actor’s mouths and jaws. The masks are exchanged to represent the dueling personalities – for as the second act progresses, they do become rivals.

There is considerable humor in this mismatch of body parts, as well. Clever staging, colorful costume design and westernized forms of Indian music played by a quartet onstage, led by Paul Amiel, enrich the story’s atmosphere.

This folk art exploration of identity is framed by another story in which Hayavadana (David Greenwood), a name translated as “the one with the horse's head,” begins the play as a man with a horse’s head. His mother, it seems, was on intimate terms with a handsome stallion.

Heyavadana is very unhappy about this. At the end of the story of Devadatta and Kapila, we see the gods have stepped into Hayavadana’s life as well, again deciding that the head determines all.

“Mistake of the Goddess (Hayavadana)” continues through Sept. 29 at The Rogue Theatre, 300 E. University Blvd., with performances at 7:30 p.m. Thursdays-Saturdays, 2 p.m. Sundays, plus a Saturday matinee Sept. 28.

Posted by TucsonStage.com at 11:49 AM