"RUSH" TO GET YOUR SEAT 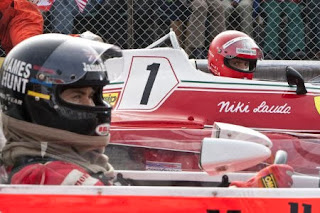 Although that title “Rush” doesn’t tell us much, it refers directly to the adrenaline rush that fueled the drivers of Formula One cars racing through Europe’s twisting road courses in the 1970s – before the annual fatality rate of Formula One drivers finally forced them to face their own suicidal death wish.

Actually, it wasn’t a death wish so much as it was a fantasy of invincibility in a world of millionaires willing to spend vast sums of money to build race cars that kept getting lighter and faster. Since ordinary safety equipment adds weight without contributing to speed, it wasn’t very high on any car owner’s list of requirements.

As for the Formula One drivers themselves, few pursuits in Europe had more cachet. The grounds of Formula Two and Three race tracks were full of bravado and guys willing to risk a fatal crash to win a race.

Two of them were English playboy James Hunt and Austrian gear head Niki Lauda. Both came from extremely wealthy families. Hunt (Chris Hemsworth) was the daredevil with lightning reflexes. Lauda (Daniel Bruhl) was the auto analyst who could squeeze more performance from any machine.

Taken together, their fabled duels for dominance in the mid-1970s personified the classic clash in all of art between impassioned intuition and fabled technique.

Howard’s most brilliant film yet captures this magnificent conflict in ultra high definition cinematography on giant screens with beefed up theater sound systems able to reproduce the chest-pumping roar of those unrestricted engines.

Yes, race fans, the track scenes of actual racing feel absolutely authentic. And there are lots of them. Eschew the special digital effects and artificially pumped up engine screams. Part of the film’s mythology is that several days were reserved for getting in the cars, with cameras mounted all around, and going racing.

The film roughly spans 1975-76 when Hunt and Lauda were rising fast through the Formula One ranks as Howard hones his edge to this high octane duel of RPMs at the redline.

What’s best is the quality of off-track acting as Hemsworth and Bruhl deepen the driven personalities of these two competitors.

Hunt’s easy charm and world class bank account are only the surface of a man determined to show he is worth something more.

Lauda is equally brutal with recognizing his own lack of social skills as he is sizing up an inferior race car. But Lauda also knows he has some genius qualities in setting up and driving these cars. What he lacks in charisma he is determined to make up in racing success.

The stage is set, and history has already recorded the result.  If you know who won this competition, keep it to yourself. Screen writer Peter Morgan (“The Queen,” “Frost/Nixon,” “The Last King of Scotland) does an excellent job putting in enough racing terminology to keep the most unaware audience member up on the importance of this competition.

In the pantheon of sports movies, “Rush” easily secures its place among the front-runners.

Posted by TucsonStage.com at 3:47 PM