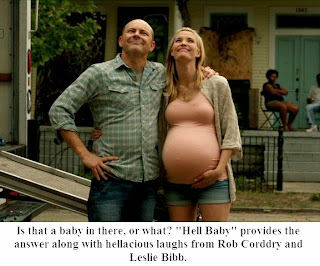 It’s good to know, going into “Hell Baby,” that the two wild and crazy chain-smoking exorcist priests are also the co-writers and co-directors of this unabashed over-the-top juvenile comedy that is pretty darn funny.

Get in touch with your inner middle-school-troublemaker.  This movie is now playing at the Loft Cinema, 3233 E. Speedway Blvd., and should also have a long, happy life in videoland.

Thomas Lennon and Robert Ben Garant (the “Reno 911” TV series and matching movie, and “Night At The Museum”) are willing to go the extra mile, push the envelope a little further, do most anything to get that extra ounce of laughing disbelief.

But gross-out sex and gross-out body functions are not in their tool kit to build this joke machine. Well, maybe a little, but just enough to reassure us they are really more interested in being clever.

Rob Corddry and Leslie Bibb do all the heavy lifting as Jack and Vanessa, a clueless yuppie couple who move into a dilapidated New Orleans ghetto mansion straight out of the horror movie set design catalogue.

Full of annoyingly idealistic virtues, they intend to fix this house up, sell it for a huge profit and upgrade the whole neighborhood at the same time.

Stealing his every scene is Keegan Michael Key as F’resnel, the eccentric neighbor who occasionally sleeps in their house’s crawlspace and loves to describe in disgusting detail the most gruesome murders that took place in this old house.

It doesn’t take long for evil things to begin happening, as extremely pregnant Vanessa takes to drinking large glasses of wine and slurping down handfuls of Valium.

Additional cast members begin adding to this merriment from the dark side. Notable are skeptical police officers played by Rob Huebel and Paul Scheer of “Human Giant” and…delightful for her excess energy…country comedian Rikki Lindhome (of Garfunkel & Oates) as Vanessa’s uninhibited sister.

As the horror energy accelerates, and the fumbling cops investigate, it becomes clear that supernatural powers are involved and an exorcism must be performed.

Enter those two Father Guido Sarducci-styled priests, willing to perform the exorcism as long as Cardinal Vicente (David Pasquesi) approves their per diem.

Also watch for the brief appearance of Indian comedian Kumail Nanjiani, making a positive impression just by saying he’s only there to hook up the cable TV.

Posted by TucsonStage.com at 1:54 PM