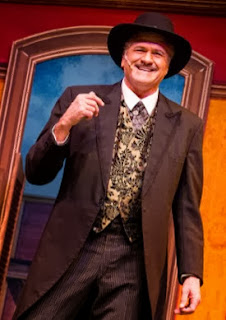 Armen Dirtadian is back at Gaslight!!

The broad shoulders of two longtime Gaslight Theatre favorites – Armen Dirtadian and Dave Fanning – are back onstage, bringing some impressive muscle to a solid production of “The Belle of Tombstone,” another audience favorite in the Gaslight repertoire.

Written and directed by Peter Van Slyke, “Belle” continues the eastside theater company’s tradition of staging a cowboy melodrama during the snowbird season. Having Dirtadian and Fanning in the cast is extra gravy on the side.

Not one to miss an opportunity, though, Van Skyke slathers on the male backup singers who keep showing up to provide some smooth harmonies for such dramatic cowboy songs as “Ringo,” “Big Iron” and “Ring of Fire.”
Along with the strong singing on the Western-ish song list, there are puns galore about horses, cows, herds and other free-range opportunities. So what if these wayward range hands didn’t have central heating in their bunkhouse, they did have Belle’s Silver Dollar Saloon in Tombstone.
Close enough! The generous Belle was determined to run an honest establishment. Not for nothing was she also known in these parts as “the miners’ angel.”
None of which sat very well with Jack Diamond, the notorious “businessman” in a black three-piece suit who had his own assortment of schemes to make some easy money.
At Gaslight all the roles are double cast, so at most shows Dirtadian stands tall (very tall) as the sinister Diamond.
Fanning gets to play the famous bad guy Johnny Ringo, who shows up to lead a trio of restless cowpokes in a scheme to steal the mining claim of unlucky Frank, who accidentally got lucky with a stick of dynamite and discovered a rich vein of silver.
In the finest Western movie tradition, any number of dastardly villains can be brought to justice by one idealistic and noble lawman. That would be Ned Wingate, US marshal. Mike Yarema and Jake Chapman take their turns in this role.
As for the after-show olio, today’s stars of country music get all the attention. Before the final curtain, audiences are offered wisps of Garth Brooks, Hank Williams Jr., Patsy Cline, Billy Ray Cyrus, Julio Iglesias/Willie Nelson, Dolly Parton, Rascal Flatts and Ronny Dunn.
“The Belle of Tombstone” continues through March 30 at Gaslight Theatre, 7010 E. Broadway, with performances at various times Tuesdays through Sundays. Tickets are $18.50 adults; $16.50 students, seniors and military; $8.50 children 12 and under. Reservations recommended, 520-834-3463, www.thegaslighttheatre.com

Posted by TucsonStage.com at 7:50 AM