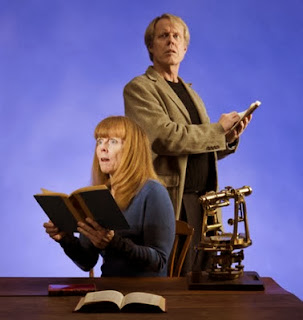 If you believe the best kind of theater is both entertaining and thoughtful in the most substantial way, then the Rogue Theatre has a play for you!

We’re talking the Rogue’s new production of Tom Stoppard’s 1993 success, “Arcadia.” Blessed with a strong cast and understated direction by Cynthia Meier that gives all the subtle humor room to blossom, “Arcadia” becomes a banquet for the mind and a high-energy drink for the imagination.

Stoppard’s famously rich language is abundant here, along with a sly sense of humor that never stops. Really, you can think of “Arcadia” as an upscale version of Neil Simon. Only with
“Arcadia” you also get enough philosophy and science to make the experience equal nearly three hours of guilt-free pleasure.

There is plenty of commentary on sex, as well, should you need that sort of thing.

Stoppard sets his play in two worlds some 175 years apart – the early 19th century (in candlelight) and the late 20th century (with a laptop computer).

In keeping with the Rogue’s tradition of minimal scenery, the stage is dominated by a long narrow library table that becomes a kind of time machine shuttling back and forth between two scholarly families in the same house.

Elaborate costumes keep us appraised of which time period we are in at any particular moment -- except for the final scene, when both ends of the story are merged in a final triumph of illusion.

The plot is more of a launch pad, really, spinning airborne thoughts on truth vs. knowledge, science vs. belief and the erosion of facts pushed through time on the pages of books.

Chances are quite good that everyone who sees this production will come away with a little different idea of what it is about, and what are its most important points. Everyone will be chuckling, too.

In a strong cast of 11 actors, Ryan Parker Knox is the playmaker as Septimus Hodge, a tutor to the 13-year-old heiress genius Thomasina (Gabriella De Brequet). While dodging her oblique 19th century questions about carnal embrace, Septimus is caught up in some scandalous doing that possibly  involves Lord Byron the rapscallion poet.

Knox portrays the proud tutor as a dogged man who believes his intelligence makes him as equally deserving as the wealthy family he serves, though they don’t seem to share his opinion.

Kathryn Kellner Brown in a much smaller role as Lady Croom makes a much larger impact projecting the arrogance of power in this family of overachievers.

Meanwhile, in the year 1990 or so, Joseph McGrath fills the stage as Bernard Nightingale, another intellectual with an agenda. Energetic Patty Gallagher matches him chess move for chess move as Hannah Jarvis, his tight-jawed competitor for recognition of deep literary research to unearth a buried incident of sordid intent in the life of Lord Byron.

Complex metaphors sprout like mushrooms in patches of wet summer shade as events that seem so casual in the 1809 household’s preoccupation with appearances are interpreted as hard core evidence in the glow of today’s computer screens.

“Arcadia” at the Rogue Theatre enters the season as much-appreciated ballast to the lighter fair currently playing at other local theaters. The fourth weekend in January will bring two more thoughtful plays: “Other Desert Cities” at Arizona Theatre Company, and “boom” at Winding Road Theatre Ensemble.

“Arcadia” continues through Jan. 26 with performances at 7:30 p.m. Thursdays-Saturdays, 2 p.m. Sundays, in the Rogue Theatre at the Historic Y, 300 E. University Blvd. For details and reservations, www.theroguetheatre.org

Some performances are sold out. Call the Rogue ticket line at 520-551-2053 to get on the waiting list for those.

Posted by TucsonStage.com at 2:49 AM