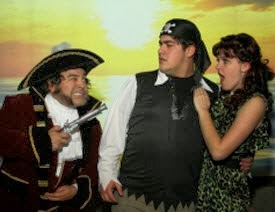 Yes, you lovers of the visual elements, “Booty Island 3-D” now playing at the Great American Playhouse is definitely being presented in all three dimensions – and it is rated “Arrrgh!”

There is big trouble on the high seas at the brand new theater in Oro Valley, with bearded Capt. Hazard in search of treasure he buried on that aforementioned piece of aquatic real estate – which just happens to be ruled by the Sisterhood of Sirens.

Coming along to add the X-factor of good fortune for a profitable outcome is the swashbuckling adventurer Lucky Pierre.

All the shows at GAP are double cast. Taking turns playing the grumpy pirate captain are Jesus Limon and Mike Claridge, who also handles the role of Lucky Pierre, along with Sean MacArthur.

Nick Seivert, writer and director of this scalawag tale, takes a comedy role as the real life theater’s stage manager who doesn’t know anything about the seagoing life but is forced to fill in for a missing actor cast as one of the pirate crew. Brian Paradis also takes this role sometimes.

Here in the land of good guys and bad guys (with no Mister In-Between) it is the strong-willed Sisterhood of Sirens who saves the day. Trust me…knowing this will not spoil the ending.

Adding to the nautical atmosphere is a sword fight between Lucky Pierre and Lady DeBlister (Jacinda Rose Swinehart/ April Lisette), a Magic Medallion that knows where the treasure is buried, some acrobatics by the Siren Sisters themselves, a talking tree and members of the undead living in Dead Man’s Cave.

Oh, and a light-footed bunch of dancing skeletons.

The GAP’s traditional olio following the melodrama main course is a celebration of the carefree days of vaudeville. MacArthur leads the way singing a couple of Al Jolson favorites, while Jodi Darling remembers the fairies at the bottom of her garden.

There are lots of corny jokes reflective of the period, as well, sweeping everyone toward a patriotic grand finale.

Tickets are $17.95 with discounts available. For details and tickets, 520-512-5145, or visit www.greatamericanplayhouse.com

Posted by TucsonStage.com at 5:38 AM