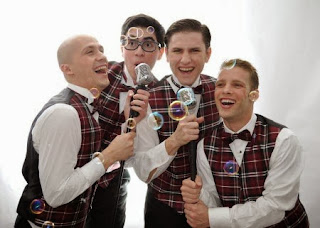 Forever Plaid are (from L) Brian Levario, Daniel Lopez, Jeremy Varga and Daniel Gilmore. The bubbles are for atmosphere.

Their harmonies are magical, the humor campy, in the entertaining Arizona Onstage production of  “Forever Plaid,” a whimsical musical that lives up to the promise in its title.

Conceived and developed in the late 1980s by Stuart Ross as both a celebration and rib-nudging poke at balladeering male quartets of the 1950s, “Forever Plaid” has become a congenial showcase for such pop classics as “Three Coins in the Fountain (1955),” “Love is a Many Splendored Thing (1954)” and “Moments To Remember (1955).”

If those songs are dancing in your head right now, be sure to get a front row seat for this show – which won’t be easy. Last weekend’s opening performances were sold out and word is spreading fast that “Forever Plaid” is guaranteed to pick up your spirits and put a big smile on your life in the new year.

In other words, “Forever Plaid” playing downtown in the upstairs Cabaret Space at the Temple of Music and Art, 330 S. Scott Ave., is already a huge hit.

Lots of other music from the same pre-Beatles period is tossed in, too -- 28 songs in all -- including a very emotional rendition of the big Johnny Ray hit “Cry” and a working man’s medley of “Sixteen Tons” and “Chain Gang.”

In today’s hypersensitive pop culture atmosphere, it would be difficult to even get a song like “Chain Gang” played on the radio. But history has its prerogatives, so Sam Cook’s 1960 recording gets a free pass.

But hey, “Forever Plaid” is about big fun, not old history.

Kevin Johnson, the founding artistic director of Arizona Onstage, has whipped up a frothy concoction of heart-felt love songs kept floating on a comedic mood that becomes endearing for its poignant innocence.

The four lads responsible for all this good time joy are Daniel Gilmore, Brian Levario, Daniel Lopez and Jeremy Vega. Each has a specific character to create, though it is the music not the story that makes “Forever Plaid” so special.

Making a massive contribution to the period atmosphere is choreographer Samantha Cormier. She has done some very accurate research to get all the singers’ hand gestures and body language just right.

However, the set-up does provide a sentimental context for the performance. The year is 1964 and the group Forever Plaid is all rehearsed for its break-through gig of a lifetime when a school bus full of Catholic girls plows into the Plaids’ car and all four are killed. None of the Catholic girls suffer a scratch.

So in the opening scene the four Plaids discover themselves in kind of a heavenly limbo, hoping to sing their way into Heaven by presenting the show they didn’t get to do on Earth.

Their musical personalities are kind of…um…square, which you would expect from guys who ignored rebellious Elvis to cast their lot with the likes of the Four Aces, the Four Lads and the Hilltoppers.

Yet there is no denying if Gilmore, Levario, Lopez and Vega could time travel back to 50 years ago, they would deserve a shot at the big time and a name brand recording contract.

Or at least a showcase date on Dick Clark’s “American Bandstand.”

“Forever Plaid” continues through Jan. 19 with performances at 8 p.m. Fridays and Saturdays, 3 p.m. Sundays, in the Cabaret Space at the Temple of Music and Art, 330 S. Scott Ave. Tickets are $32.50, with discounts available. For details and reservations, www.arizonaonstage.org

Posted by TucsonStage.com at 1:35 PM