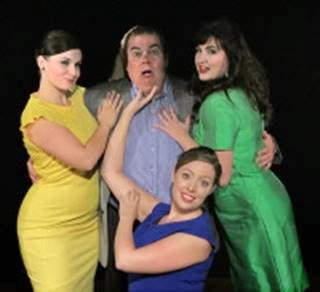 The ladies (from left) Cyndi LaFrese, Candace Bean and Janet Roby close in on Rick Shipman.

Progress always has a dark side, and in the Live Theatre Workshop production of Marc Camoletti’s warp speed farce “Boeing Boeing,” progress becomes a force for self-destruction.

With Stephen Frankenfield the director at the controls, this production is red-lining it’s DSM (Doors Slammed per Minute) from start to finish.

Rick Shipman is Bernard, the guy caught in a social scheduling blender of his own making – an unabashed Lothario in Paris happily entertaining a trio of unaware airline stewardesses, each of whom consider Bernard to be their own personal fiancé in waiting.

As for that aforementioned progress, the year is 1963 or so as international airline service is shifting to jets with shorter flight times between countries.

Oops. Gloria (Candace Bean) with TWA, Gretchen (Cyndi LaFrese) with Lufthansa and Gabriella (Janet Roby) with Alitalia, don’t stay in the air as long as they used to. Bernard’s carefully worked out airline time table romances are tossed into a cocked hat. By the time we get to intermission, all three women are descending on Bernard’s five-door flat.

Tossed into the mix to keep the comedy whirling are Keith Wick as Bernard’s resourceful house guest Robert, and Amanda Gremel as Bernard’s seething housekeeper Bertha, whose thankless job is to keep each of these air hostesses from finding out about the other two.

So the laughs are non-stop as Camoletti combines snappy dialogue with physical fun from the actors’ sharply timed entrances and exits. Berthe gets her laughs being both referee and ringleader in the gathering chaos.

Starting fast and going faster, the  pace becomes a big part of the humor, too, as Bernard gets steamrolled by the Laws of Physics – it really is impossible to have two (and certainly three) of these uniformed ladies occupy the same space at the same time.

For details and reservations, 520-327-4242, or visit www.livetheatreworkshop.org

Posted by TucsonStage.com at 5:37 AM