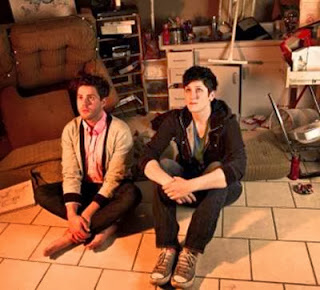 Have you ever wondered what the world might be like today if, back when the Garden of Eden was new, it turned out Adam was gay and Eve’s rebellious streak included a lack of interest in being responsible for the entire human race?

What if this lack of compatibility in Paradise was so disruptive it required some rude Divine Intervention to kick-start the whole Genesis of Life thing?

If so…then get into a hyper-active state of mind and go see “boom” downtown in the Cabaret Space at the Temple of Music and Art. Ivy League playwright Peter Sinn Nachtreib is pushing against the envelope and thinking way outside the box in dreaming up this geek brain party that’s given a fearless production by the Winding Road Theater Ensemble.

WRTE’S artistic director Christopher Johnson is at the helm, keeping the actors’ intensity bumping against the redline of possibility. Theatergoers addicted to reality may find the assumptions in this story rather extreme, but that’s why arriving with empty arms and an open mind are pretty much essential.

Performed non-stop without intermission (there will be plenty of time for reflection later) the story suggests much more than it takes time to explain.

For example, Jules (Evan Werner) is a graduate biology student who placed a personals ad promising “sex to change the course of the world.”  That sounded good to cynical journalism student Jo (Dani Dryer), who shows up at Jules’ tiny apartment/lab ready for action.

But the action Jules has in mind is taking place in his tabletop fish tank where, we learn, he has detected fish behavior that proves the end of humankind is near.

Meanwhile…off to the side of the stage at her own desk of tools to manipulate the behavior of humans on Earth is Barbara (Avis Judd), herself no stranger to cynical attitudes about the meaning of life. In Heavenly terms she has angelic powers, but says she is merely the manager of this “exhibit.”

She also can’t resist getting more involved with Jules and Jo than an exhibit manager probably should – but that becomes part of the fun, too.

Nachtreib (who did major in theater and biology) is just getting his own career going as a playwright. It seems he has taken the surreal mindset of Christopher Durang (“The Marriage of Bette and Boo,” “Baby With the Bathwater”)and started pulling it into the 21st century.

As we in daily life watch the real world that is rising from today’s fantasy powers of digital technology, along with the decline of religion’s ability to inspire and the political chaos of splintered societies erupting in new wars every week, it’s clear that conventional theater just won’t be able to handle everything.

Some new forms of theater must be developed.

At this point in time (no pun intended) Nachtreib’s take on the situation is certainly as valid as any other.

Posted by TucsonStage.com at 10:19 AM