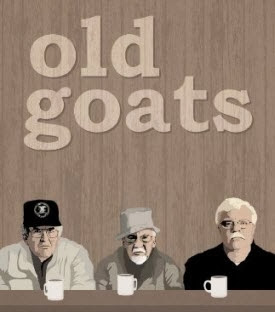 If you are a male at or near retirement, think of “Old Goats” as a warning shot fired across the bow. This indie film written and directed by Taylor Guterson, now screening at the Loft Cinema, 3233 E. Speedway Blvd., can become downright depressing for gentlemen of a certain age.

“Old Goats” is one of those all-natural pictures which people of a much younger age think of as charming. Showing geezers from the World War II generation swearing among themselves, but always using proper language in the presence of women is always an important angle.

Having a bit of a bashful attitude toward sex is part of the portrayal, too. Just the idea that these folks moving kind of slow through their final years would still wish for the gumption to  give another girl a go always seems so cute to the present-day millennials (as they seem to be called).

Starring in this well-intentioned adventure are Britt Crosley, Bob Burkholder and David VanderWal, real people (not professional actors) who would be considered real characters at any senior citizen center.

Each is given the space to develop a distinctive character. Britt is something of a reluctant loner, spending his adult years as an auto mechanic living on a modest sailboat his father gave him some three decades past. He hasn’t taken his boat out in years, but continues to make his home in the 70 square feet of cabin below deck.

Bob is the most grizzled and outspoken, with many tales of being a war vet, Alaskan bush pilot, big game hunter and accidental womanizer (he just can’t help it), but who does never seem to be without a girlfriend.

The saddest and the richest is David, a recently retired corporate executive with lots of money, a lovely home and a well-mannered trophy wife of many decades. Maybe it’s because he is the best actor, but we see in his portrayal a genuinely good guy who spent his whole life doing what he should do instead of what he actually wanted to do.

Watching his performance provided another kind of warning – pretty soon there will be waves of films aimed at the boomer generation of senior citizens breaking out of their Wall Street corporate molds to become gray-haired revolutionaries living in communes, smoking lots of medicinal pot and playing protest songs on very expensive guitars.

But here and now we have “Old Goats,” which has a positive message in its own way and proves the courage of all three of these guys who refuse to go quietly into that long gray night.

Posted by TucsonStage.com at 5:40 AM