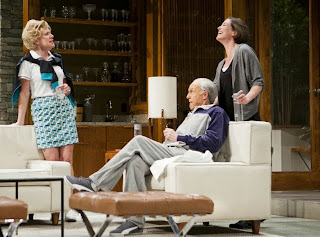 From left,Polly (Anne Allgood), Lyman (Lawrence Pressman) and Brooke (Paige Lindsey White) do share a laugh now and then in Arizona Theatre Company’s "Other Desert Cities."

On the Arizona Theater Company stage, “Other Desert Cities” is about the conflicted politics and philosophies that turn children against their parents in the wealthy Wyeth clan of Palm Springs.

But in your own mind, this seething play by Jon Robin Baitz will be about nothing less than the fortyyears of cultural civil war still being waged this very minute across our terminally polarized country.

When does rigidity become rigor mortis? Society is locked in a mental trench warfare of intractable forces. Since neither side will yield, driven by both fear and anger, exhaustion becomes terminally draining.

Appreciating how these attacks on traditional values since the 1960s have weakened and demoralized the United States is more easily accomplished when the battle lines are drawn across the lives of five people in two generations of Wyeths.

Balance is the gift Baitz brings to his reportage, like a war correspondent reporting equally on both sides of an explosive confrontation in a distant land.

Sons and daughters challenge their parents’ authority, sincerely wanting to make the world a better place. But at the same time, upsetting the stability those parents have provided their children unconditionally.

Are the “old fogies” holding back progress or bolstering stability? Will raising taxes and raising the minimum wage help the working class or weaken the upper class? While the questions are obvious, the answers are not even close to being resolved

James Still has directed the ATC production with an even hand. Lawrence Pressman and Anne Allgood represent the ultra-conservative parents Lyman and Polly Wyeth, personal friends of Ronald and Nancy Reagan.

Just like Ronald, Lyman was a popular Hollywood actor in his youth, playing cowboys and plainclothes detectives. Just like Nancy, Polly is devoted to continually refining her manners and appearance.

The Wyeths’ children are Brooke (Paige Lindsey White), a rebellious writer know for abusing recreational drugs, and Trip (Will Mobley), the younger sibling who is having success with a mock-courtroom drama  on cable TV where all the jury members are celebrities.

Cast as the wild card is Robin Moseley playing Silda Grauman the unhappy sister of Polly. Recently released from rehab, Silda is also visiting. For those keeping score at home, Silda is still an unrepentant liberal, closer to siding with Brooke than with Polly.

Unseen is Brooke’s older brother, Henry, whose suicide was connected to a destructive anarchist act that also killed a Vietnam veteran. Brooke blames her parents for Henry’s death.

The play takes place during the day and evening of Christmas Eve, 2004, when Brooke announces her tell-all book about growing up with her famous parents has  been accepted for publication.

As all Hell breaks loose on several fronts, finger pointing and foot stomping fill the beautifully appointed  home that Ann Sheffield designed for this production.

All sympathies do not accumulate to Brooke. Selfish actions in the past have damaged her cause. Polly and Lyman also receive praise as well as blame.

ATC’s production of “Other Desert Cities” keeps the competition keen. It’s likely both liberals and conservatives in the audience will feel their side won this contest.

Both will be wrong. Plan time for some meaningful discussion on the way home.

“Other Desert Cities” continues through Feb. 8 with performances at various times Tuesdays through Sundays at the downtown Temple of Music and Art, 330 S. Scott Ave. Tickets are $37-$67. For details and reservations, 520-622-2823, www.arizonatheatre.org

Posted by TucsonStage.com at 5:41 AM