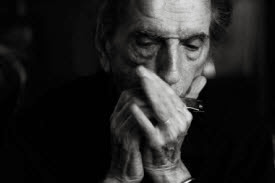 Just as the title implies, “Harry Dean Stanton: Partly Fiction” is more atmosphere than it is documentary. You are left to decide which is the fiction part.

Looking like he has thoroughly lived every one of his 87 years, Stanton faces the camera of his documentarian Sophie Huber with more pensive looks than factual recollections.

Desperate for content, Huber has invited movie colleagues David Lynch, Wim Wenders, Sam Shepard, Kris Kristofferson and Debbie Harry (who once wrote a song about Stanton’s onscreen mystique) to come by and get the low-key actor to open up a little.

Debbie Harry could only record a long distance phone call, but her voice does stir something deeper inside Stanton.

More than once Stanton insists he has no off-screen personality of his own. If he isn’t acting, he isn’t anything.

Peter Sellers often made this same claim. It isn’t really modesty. The gift of both men is an ability to consistently create under any circumstance a consistently charismatic personality.

Oddly enough in this collection of movie excerpts in color and interview excerpts in black-and-white, a good bit of his wrinkled face time is spent singing some his favorite songs.

Toward the end of the film he says somewhat ruefully that he would have preferred a career as a singer. But there is no danger a great voice has been ignored by the fickle finger of fate. Stanton and Tom Waits would sound about the same in any bathtub.

Fans of Harry Dean Stanton will feel they’ve spent a warmly inviting 77 screen minutes in the presence of their hero. What more could be asked of a movie ticket?

Screen historians will wish for more substance than Stanton’s confession he was always a womanizer but never a committed partner. Or his lack of a lasting relationship with any of his children or their mothers.

However there is no shortage of praise from the famous folk who do stop by to spend a little time sitting on Stanton’s couch with the camera watching. All those Harry Dean Stanton fans are sure to agree.

Posted by TucsonStage.com at 5:39 AM