"56 UP" GROWS ALONG WITH ITS SUBJECTS 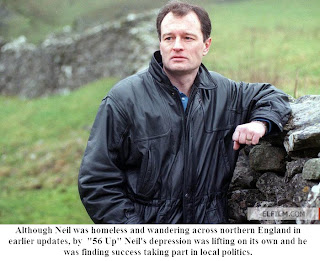 Maybe life really is what happens while we are making other plans. The evidence looks strong in English filmmaker Michael Apted’s “56 Up,” now playing at the Loft Cinema, 3233 E. Speedway Blvd.

This is Apted’s latest seven-year updating of the 14 kids he featured in the British TV program “7 Up” back in 1964. All the children were seven years old and their lives became an instant hit as they talked about their dreams for the future – mostly because of their freely expressed innocence and their total unawareness of Britain’s class system.

So Apted came back seven years later and talked with all of them again in “14 Up.” That was another huge hit.

Now it is almost 50 years later and we’re all hooked – most especially Apted himself – on how these particular lives are turning out in their seven year reports.

With so many years of clips to choose from, the filmmaker easily brings us up to speed on each of them, flashing from childhood to adolescence to those awkward decades in their 20s and 30s when everyone was getting married and divorced and trying to find the courage to start over.

And suddenly here they are…too old to start over still again, sliding obliquely into lives of compromise they would have never imagined, and still being courageously heartwarmingly determined to make the most of it.

At least, that is the shared story for most of them. A couple of others still smile easily and feel optimistic. They also are (predictably, perhaps) the most educated who began with the most stable parents and economic surroundings. Perhaps it is discouraging when stereotypes come true so often, but after all, that’s how they became stereotypes.

Watching all this, it becomes clear how the genius of this 50-year appeal is in Apted’s editing, not the charisma of the people themselves. For the most part, they are just average people with just average stories. Yet, each story is presented with such disarming courage only the most cynical audience member could sneer at their often unproductive life choices.

Most amazingly, all are alive and appear in pretty good health. This is certainly a positive mark for Britain’s oft-maligned health care system.
One man, Neil, seemed to be succumbing to depression in earlier updates as he wandered homeless across the moors of northern England. But now the depression has relented and he is active in local politics, getting elected to office.

Also on the optimistic side – optimism being an American trait, you know – is Sue, a working class girl who found herself divorced with two children and stuck in a secretarial slot. But she rose through the administrative side of her company and now lectures to halls full of college students, giving them advice though she has never been to college herself.

If you, too, are hooked on the remarkable “Up” series and the lives of these solid British citizens, seeing “56 Up” is required viewing. For the rest (friends and mates of the fans) who will be attending without being familiar with the earlier films, Apted provides plenty of background so it is easy to appreciate each life.


Posted by TucsonStage.com at 5:58 PM