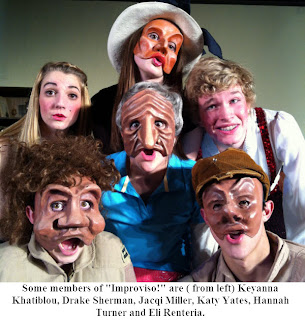 If the new stage group Theatre 3 has anything to say about it, there will be clowns in your future.
Although this doughty troupe has a long way to go, its destination is clear – to perform and present contemporary Commedia Dell’Arte.

Exactly what this might be, well, that’s not so clear. In its debut at Live Theatre Workshop, 5317 E. Speedway Blvd., a company of nine enthusiastic devotees (five of them from Catalina Foothills High School), ran through an hour’s worth of routines filled with slapstick pratfalls, funny noises, extreme gestures and  exaggerated dialogue. They called it “Improviso!”

They also wore masks that, it seemed, were intended to define their characters. Some masks had grotesque noses, others had pouchy chipmunk cheeks, and others were just silly. But since none of the characters being portrayed acted too much like how their masks looked – well, once again we just can’t be quite sure.

Better we should wait and – this being Tucson where re-inventing oneself is a daily occurrence – see what develops onstage.

An insert in the program tells us that on Feb. 25, 1545, a group of comic actors in Padua, Italy, signed legal documents to become the first incorporated theatre company. It makes complete sense that a bunch of clowns would be the first performers to take theater seriously.

The program notes continue to explain that “The style of Commedia is characterized by its use of masks, improvisation, physical comedy and recognizable character types: young lovers, wily servants, greedy old men, know-it-all professors, boasting heroes and the like.”

Today’s political street theater also employs the commedia style, the program notes point out, although “Improviso!” contained nothing political. It was, instead, more traditional in that all the choreographed routines felt more like the routines circus clowns use in telling their tales in the sawdust.

On the front of the program is printed: “Warning: Commedia Dell’Arte is an old theatre form that is bawdy, scatological & includes enlarged body parts, gross occurrences, & vulgarity.”

This warning is a little premature. The only enlarged body parts in “Improviso!” were those cheeks and noses. There wasn’t anything bawdy or scatological, as I recall. The only signs of grossness and vulgarity were a few mentions of getting cancer for Christmas.

Making the audience uncomfortable is another objective of Commedia Dell’Arte, so for that one, the company definitely receives an “A.”

Catch this show, so one day you can say, “I remember way back in February, 2013, when Theatre 3 was just getting started and I saw their first show at Live Theatre Workshop, 5317 E. Speedway Blvd.”

Posted by TucsonStage.com at 8:43 AM