ART IS BITTERSWEET IN "AMOUR" 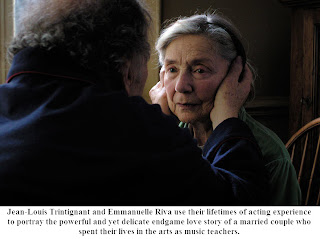 If you didn’t grow up in America’s cinema art houses, this may not be your kind of film. But if you did, sipping coffee in the dark while all the other kids were in some movie-plex with popcorn, you will find much to love in the bittersweet “Amour.”

Supple as old leather and equally tough, Jean-Louis Trintignant (“A Man and a Woman”) and Emmanuelle Riva (“Hiroshima, Mon Amour”) as directed by Michael Haneke (“The Piano Teacher”), capture in French the haunted desires of love during the endgame of life.

They portray the retired music teachers Georges (Trintignant) and Anne (Riva) comfortably married in their 80s, sharing their life in a Parisian apartment, finding equal nourishment in the arts and in each other’s company.

This idyllic intellectual atmosphere is the landscape for two sensitive souls finally having the time to enjoy the emotional depth of their life’s perspective. Only…in a quick flash at breakfast one ordinary morning…Anne stiffens, staring blankly into empty space.

In one instant of silent misfortune, she has suffered a stroke. Although her awareness returns and her appearance never changes, something isn’t quite right. Her personality is askew and the doctors are of little help.

Neither is their daughter Eve (Isabelle Huppert). Living in London with her own musician husband, Eve returns to Paris and wants to be helpful. But what Georges and Anne truly need, Eve can’t provide.

As his wife’s condition grows worse, Georges realizes he must make some kind of preparations for his life without her. But his mind simply isn’t up to the task. He can’t imagine such a life.

Anne is no longer able to help him, either. For the first time since their youth, Georges is truly alone. Anne is equally helpless to change anything. We watch her decline like someone drowning, slipping beneath the surface, unable to do anything else.

To convey the simultaneous simplicity and complexity of their relationship requires a lifetime of acting skills rich with subtle shading. Nothing else could possibly be enough.

Posted by TucsonStage.com at 8:42 AM